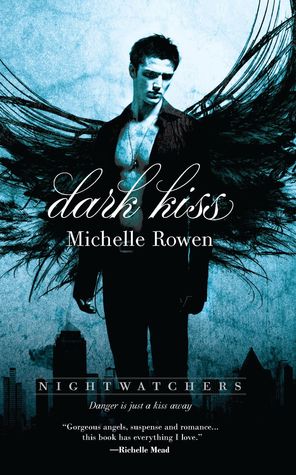 I don’t do DANGEROUS.

Smart, über-careful, ordinary Samantha—that’s me. But I just couldn’t pass up a surprise kiss from my number-one unattainable crush. A kiss that did something to me…something strange. Now I feel hungry all the time, but not for food. It’s like part of me is missing—and I don’t know if I can get it back.

Then there’s Bishop. At first I thought he was just a street kid, but the secrets he’s keeping are as intense as his unearthly blue eyes. If he’s what I think he is, he may be the only one who can help me. But something terrifying is closing in, and the one chance Bishop and I have to stop it means losing everything I ever wanted and embracing the darkness inside me….

Nightwatchers: When angels and demons must work together, something beyond evil is rising…

This review is of an ARC received from NetGalley. You can get a copy of your own May 22, 2012

So, I should probably start this off with a disclaimer: This review will be tempered with a LOT of my personal opinions about books. If you don’t already know (and I’ve been very loud about this) I hate insta-love. I hate love triangles. I really, really don’t like Twilight. That’s just the way I roll.

The mythology Rowen used was excellent. The angels aren’t (entirely) models for perfection and the demons aren’t rampaging and/or sexy monsters. They work TOGETHER against these new entities (to me anyways) called “grays,” which are humans who are kissed by a demon or another gray, and the being eats their soul. These new grays then have the unavoidable urge to kiss other humans for their souls. It goes on from there, but I don’t want to give too much away, but let me tell you it goes UP. It was fairly new twist on another fad, which was very nice to read.

For me, however, the story didn’t get off on such great footing. Even though I KNEW the kiss that turns Sam into a gray was coming, it read … awkwardly. Actually, every status update I made while reading included the word “awkward” until about page 60. I know to some of you that doesn’t seem like even giving the book a chance, but other people I know would stop reading at page 10 so … you’ve been warned.

Once the book levels out, though, it’s pretty cool–especially when they start bringing in the angels and demon team. Even though they aren’t given huge parts to play, the majority of them–angel and demon alike–are excellently done. They’re all very different, enjoyable to read and some of them are even given the chance to have round back stories, which isn’t often done when you’re dealing with so many characters in a team.

Now, here comes a tricky part. See, this book never really stops moving, but it isn’t action like you’d expect it to be, i.e., huge flashy celestial beings fighting each other with swords and wings aglow. Rather, it’s more of a personal struggle for Samantha, as she tries to figure out who is telling her the truth as the two sides try to fight for her and her special abilities. Things start happening to her, her best friends, and to Bishop, but none of it action action. Most of that doesn’t come until the end, where it is also punctured with a lot of talking and is very brief.

Samantha and Bishop are what really irked me about this book. In places, they were a pretty great team, but as a couple? …sigh. Insta-love, for one, was awkwardly thrown at them, and even a love triangle with Bishop’s demon brother. It was the insta-love that really got me, though, because I just really don’t like it. I really don’t like it. Samantha even said multiple times that they had this mysterious connection that bound them in ways she didn’t understand. Personally, if there has to be insta-love, I’d rather the characters didn’t acknowledge it’s insta-love. Throw in Samantha constantly bemoaning the fact that she can’t read Bishop’s mind and I was having a few Twilight flashbacks.

Also irking me: The TRUST ISSUES. So many things in this book could have been avoided if people had just told others what was going on. This especially became prevalent in the last scene, when even SAM is questioning why she didn’t tell someone something that could have saved lives. If you’re going to have your MC make a horrible decision like that, don’t make the character regret it! It’s a facepalm moment for the reader.

Anyways! Besides issues that were mostly contained to one moment in time, I actually did enjoy this book. If you enjoyed the Fallen series by Lauren Kate or Unearthly and Hallowed by Cynthia Hand, then I certainly recommend this. If your brand of angels and demons is more like Angelfire and Wings of the Wicked by Courtney Allison Moulton, I’d be a bit more wary, but hey–I’ve read all of these and not hated any of them! If you want romance, angels, demons and some more romance, this is for you!

The next book in the Nightwatchers series, Wicked Kiss, is expected to be released in 2013.

One thought on “Review: “Dark Kiss” by Michelle Rowen”