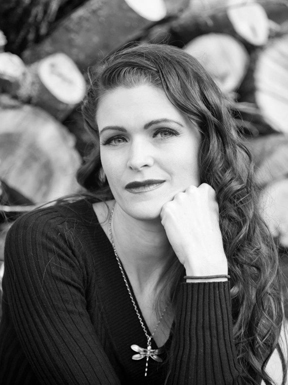 Desiree Finkbeiner attained a bachelor’s degree in Graphic Design from Missouri Southern State University (2006) with a heavy background in business, marketing, music and fine art– She was heavily involved in campus affairs and served actively in several committees focusing on campus entertainment and events.

She performed with musical acts/bands in rock and electronic genres, released seven studio albums, performed in 11 states and has written hundreds of songs. Her band, Carbon Star, was a finalist for VH1’s “Bands on the Run” reality TV show in 2000. Then she performed with Pointy Teeth until finally leaving the music industry for the quiet life.

She had a scholarship for acting in college though she was not a theater major. Although she no longer performs or focuses on musical/performing arts, she has chosen to shift her talents to other areas that are more conducive to raising a family.

Continuing education is a constant adventure for Desiree with topics of interest ranging from civil and corporate law, history, political conspiracy, homeopathic medicine and spiritual healing. She prefers to read non-fiction, especially on topics that educate and broaden her perspectives on controversial issues.

With thousands of completed art works in her archives, most of which appear in private collections worldwide, Desiree hopes to focus more on publishing, marketing and licensing her work so she can leave a legacy behind.

1. What inspired you to become a writer?

Reading inspired me to be a writer, and the need to create and have an outlet that allowed my imagination to run wild.

2. In one sentence, why should someone read your book?

Ethos is more than urban fantasy and paranormal romance, it’s a unique perspective on spiritual questions that everyone has asked themselves at least once in their lives.

3.The cover of your book is absolutely gorgeous! I understand that, in the coming print edition, there are illustrations inside as well. Tell me a little about those.

I did the art, of course, and these illustrations are simply a guide to help give a visual concept of some of the worlds I have created in the story. No imagination is as good as the reader’s, but I thought these images might give the book a visual spark of fun that other novels lack.

4.When you’re writing, do you prefer silence or do some of your characters have soundtracks? Or do you do something completely different?

Complete silence. I normally wait till everyone else in the house is asleep to write. I don’t like anything to influence me when I write – I think this allows me to feel the characters more realistically.

5. Can you see yourself in any of your characters?

All of them. Each character contains a piece of me (even the villains). We humans are complex beings, and it’s importantthat readers are able to identify with the characters. I can identify with my characters, so I hope others can too.

6. So this is a first in a series, where are you in the stages of the next book? Any teasers?

I’m 2/3 through book #2, and the plot for Book #3 is already in my mind. Without giving away total spoilers, let me just say that the series dabbles in dystopian fantasy by the end of book #2 and there is total chaos in Book #3 … don’t worry, there’s a happy ending. You can expect zombies, global war and some more romance from Brianna and Kalen.

7. When you aren’t writing, what kind of stuff do you read? Any favorite titles you think everyone should read?

Mostly nonfiction to be honest, especially books about conspiracy, liberty and history. I think everyone should read “None Dare Call it Conspiracy” and the follow-up “Call it conspiracy” by Larry Abrahms.

8. When you need to do something that doesn’t involve books or writing, what do you like to do?

Spending time with my family, art and camping in the mountains.

9. You released several studio albums and did a lot of musical performances. What was that experience like?

I had a blast as a recording artist. There’s nothing more gratifying than hearing your own music in final mix-down (even if you’re the only one who will ever like it). I had a chance to meet a lot of very interesting people, and see a lot of great cities … but I had to give it all up when the lifestyle caught up with me. Touring with a band is exhausting physically and emotionally. So I gave it up to be a mom, LOL, an even more exhausting job,but also the most rewarding!

10. Performing and writing are two very different worlds. How did you make the shift, and how did your background affect your writing?

Very different indeed. Performing thrusts you into the spotlight, literally. One can not be afraid of crowds or being the center of attention to get up on the stage and perform. Writing, however, is a solitary effort. It’s the complete flip side of the coin. Sometimes I miss the high of performance, but over the years I have become more conservative. My views and interests have changed and matured. Writing suits me better now, and allows me to focus on my family. My musical background was filled with marketing experience, so it has helped me get the book out there quite a bit. And having undergone the extreme discipline of writing, recording, booking and going on tour … releasing a book was easy, and much less stressful. 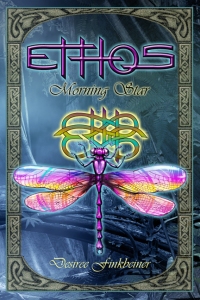 When a mysterious stranger interrupts Brianna’s mundane routine, her eyes are opened to the dark underbelly of reality… immortal rogues, ancient conspiracies, prophetic revelations, savage tribes, mammoth dragonflies…
She’s thrust into a race for her life when Kalen, a warrior from Ethos, discovers that she is harboring a secret… a secret that he’d give his life to protect.
There’s just one little problem… they are tempted by a forbidden romance, which threatens to compromise a divinely appointed mission. They are faced with a choice… love eternal, or the end of the world…