Waiting on Wednesday is hosted by Breaking the Spine. 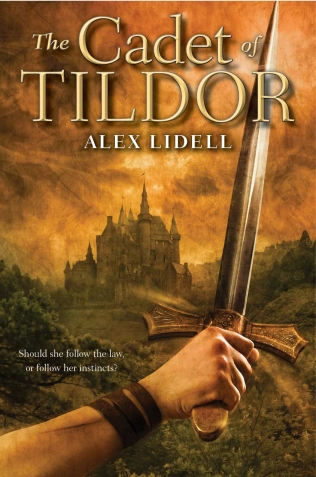 Title: The Cadet of Tildor

Summary from Goodreads: Having already survived six years at the Tildor’s top military academy, sixteen-year-old Renee De Winter is determined to graduate, training day and night to compete with her male classmates. When the boys overpower her parries, she works harder.  When a bully sabotages her gear, she fights without it.  But when an underground crime group captures her mentor for its illegal gladiatorial games, she must choose between her career and her conscience.  Determined to penetrate the group’s inner circles, Renee will leap from academia to the crime filled streets, pick up a sword, and weigh law against loyalty.

Why I’m Waiting: Okay, maybe this is a little selfish on my part, but I DID just help reveal the cover for this sucker. And what an awesome cover it is, too! The cover department actually asked Lidell to describe Renee’s sword in detail so they could match it. It looks SO NEAT and just what I like to read; almost a little Tamora Pierce-esque! Allow me a moment to remind you that, along with the cover reveal, there are also TWO giveaways being hosted by Lidell and Penguin/Dial books in celebration. Click HERE to enter!

6 thoughts on “Waiting on Wednesday #13”