Welcome to my stop of this great blog tour, as hosted by A Tale of Many Reviews and made possibly by Dial Books (Penguin)! I’ve got some great stuff for you guys today, so let’s get going! Don’t forget to check out the other blogs that are participating in this blog tour HERE. 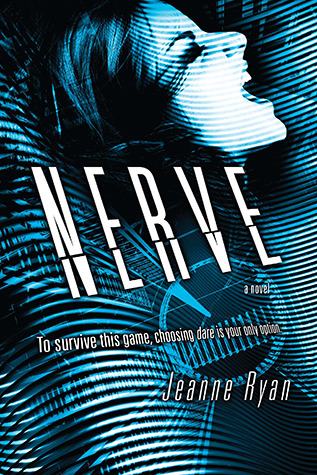 When Vee is picked to be a player in NERVE, an anonymous game of dares broadcast live online, she discovers that the game knows her. They tempt her with prizes taken from her ThisIsMe page and team her up with the perfect boy, sizzling-hot Ian. At first it’s exhilarating–Vee and Ian’s fans cheer them on to riskier dares with higher stakes. But the game takes a twisted turn when they’re directed to a secret location with five other players for the Grand Prize round. Suddenly they’re playing all or nothing, with their lives on the line. Just how far will Vee go before she loses NERVE?

Thank you to A Tale of Many Reviews and Dial Books (Penguin) for this eARC! Nerve is now available for your reading pleasure!

Dear sweet “I WANT TO STOP READING BUT I CAN’T.”

That, in three sentences, was Nerve.

To be honest, this book didn’t set off on a good foot with me. The prologue chapter takes place at the end of the book, with the first chapter backing way up in time. This is a pet peeve of mine, and personally I thought it took a ton of suspense out of the ending, which upon reading the prologue still didn’t make any sense. But once you hit the first chapter, all that is forgotten.

It actually goes through that whole, “everything is perfect” phase before heading into hair rasing territory. Vee is the best friend of the most popular girl in school but pining for the hottest guy. She is quiet, she’s more of a loner–she’s basically the best friend cliché. It is this normalcy and the distinct want to feel something different that forces Vee into the game of NERVE in the first place. As far as reasons go, it was a fairly believable one, even if it was never developed as fully as I’d have liked.

The game of NERVE is sickening on several levels–and it’s meant to be. Vee is forced to do a whole lot of things that NO sane person would do. The reasons she keeps going after things clearly start getting sketchy were, again, not as developed as I’d have liked, but this book seemed to sacrifice fleshing out of the plot in a lot of places to make room for the pacing.

And OHMYGOD was that some pacing.

Nerve never stops. Not once. Even when you want to because your stomach is attempting seven kinds of sailor’s knots. Vee’s rationale towards NERVE at the beginning is one I’ve used a thousand times to scoff at reality TV shows: it’s scripted, it’s fake, it’s just a game. NERVE pulling information about her from her ThisIsMe page sounds creepily similar to the kinds of things people maintain Facebook does. The book takes on all these secret fears we have about technology and throws them into one fiery explosion. There were several times when I felt like I had to step back and breathe or even stop reading all together because OHMYGOD, but I couldn’t do it because the book just kept charging forward into darker and darker territory.

As I said, though, the downside of this was that many aspects of the plot were never fleshed out. This goes for characterization and key plot points alike. There were passing comments made for some things and half-baked explanation for others, but all in all many parts of the story almost became useless in the HOLY CRAP THIS IS MADNESS of NERVE. Though I’d say Ryan managed to make it work because of her awesome pacing, the nitpicky side of me can’t let it go.

Personally, I was not entirely satisfied with the ending. Unfortunately, I can’t tell you why because part of my blog tour compliance is that there are no spoilers. Sorry! However, I CAN tell you that I’m begging someone to tell me there’s a sequel coming, because you CANNOT end it like that and leave us all hanging. But then, there were several things I thought you could not do and then Ryan did them and left me reading faster with a dryer mouth.

IN FOR A THRILLER? THEN ENTER THE GIVEAWAY!

That’s right, GIVEAWAY! The prize is one hardcopy of Nerve, SIGNED. The giveaway is open to US/Canada only. Please click HERE to enter!