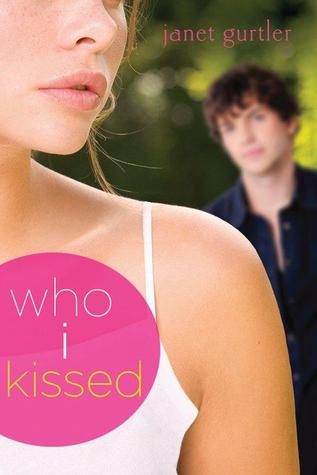 Who I Kissed by Janet Gurtler

She Never Thought A Kiss Could Kill. . .

Samantha is new at school and just recently joined the swim team.  She’s been flirting with one of her teammates, Zee, who invites her to a party and just as quickly dumps her for another girl.  Hurt, but pretending not to care, she turns to his best friend, Alex, and gives him a kiss.  And he dies—right in her arms.  Alex was allergic to peanuts, and Samantha had eaten a peanut butter sandwich right before the party.  She didn’t know.  Overnight, Samantha turns into the school pariah and a media sensation explodes.  Consumed with guilt, abandoned by her friends, and in jeopardy of losing her swimming scholarship, she will have to find the inner-strength to forgive herself for the tragedy.

Thanks to NetGalley and Sourcebooks Fire for this eARC! This book was released October 1, 2012.

By the time I was approved for this on NetGalley, I had completely forgotten I’d requested it at all. I wish I remembered the reasoning behind it, but I don’t. This isn’t a typical book for me to pick up.

As it appears, this book has a very emotional story in it. Unlike some books I’ve read recently, it really does cut to the chase with Alex’s death and leaves a majority of the book to Sam dealing with her grief. (Books that don’t disperse with things they’ve already told us will happen in the blurb seem to be a trend for some reason lately.)

Sam herself is a pretty strong character. Her grief is real. That said, the way that she deals with it sometimes leaves the reader and well as her detached from the whole thing. I understand that it’s hard to write about a character being detached while keeping the reader connected, but by the end of the book I found myself connecting less and less with Sam–which is a problem when it’s her emotional story driving the entire thing.

However, the multitude of Sam’s emotional stories in this thing was even a bigger problem. This book is hardly just about Sam, Zee and Alex. It’s about her estranged relationship with her father, the fact that her mother died young and Sam never knew her and then on top of that all of the different grief storylines. There’s Sam trying to deal with the death herself (this includes her refusal to swim and a bad relationship), Sam dealing with her classmates and then Sam trying to deal with Alex’s family. Frankly, it’s all just too much. While I understand what Gurtler was trying to do and have the utmost respect for it, it didn’t come off as well as I’d have liked. Too many subplot lines are smushed into the cracks.

The rest of the characters didn’t really have the chops to back up these plot lines, either. Honestly, the character with the most pop was Sam’s crazy, amazing aunt and her dog. At times I felt closer to the characters who were dead, Alex and Sam’s mom. Several more minor characters get more face time than Zee, despite Sam’s continued affirmations that he’s important. Once again, with all the different plot lines, there were too many characters with too many good, deep ideas to all fit into one 312 page book.

I will say, though, that the story still packs an emotional punch. I felt for each character every step of the way, even if I was more connecting to my own feelings of lost than the ones being portrayed in the pages. Not one of the topics dealt with in this book is an easy one, and each one is important. It also wasn’t your typical high school drama story, even if some of the background characters did fall into cliches. They weren’t important enough for me to really care, and they constructed fast stereotypes so that Gurtler could get on with the story.

All in all, I would recommend this to lovers of YA contemporary novels who want larger themes than just romance. I think fans of authors such as Sarah Dessens would absolutely adore this one. I enjoyed this one as much as I did because of how different it was from my normal reading, and the attempt to make it about so much more then just romance.

One thought on “ARC Review: “Who I Kissed” by Janet Gurtler”