First of all, apologies for just up and changing the time for this hangout. We weren’t sure we were going to be able to do one at all this week, and when we got a chance we jumped on it. Quite frankly, if you read this book with us … I apologize. 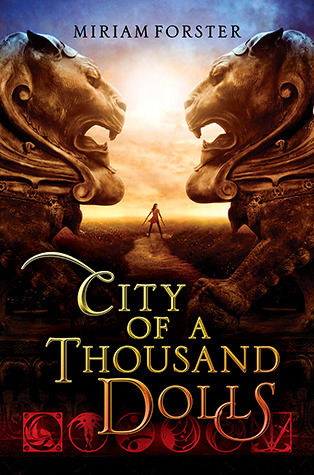 City of a Thousand Dolls (Bhinian Empire #1) by Miriam Forster

Nisha was abandoned at the gates of the City of a Thousand Dolls when she was just a child. Now sixteen, she lives on the grounds of the isolated estate, where orphan girls apprentice as musicians, healers, courtesans, and, if the rumors are true, assassins. Nisha makes her way as Matron’s assistant, her closest companions the mysterious cats that trail her shadow. Only when she begins a forbidden flirtation with the city’s handsome young courier does she let herself imagine a life outside the walls. Until one by one, girls around her start to die.

Before she becomes the next victim, Nisha decides to uncover the secrets that surround the girls’ deaths. But by getting involved, Nisha jeopardizes not only her own future in the City of a Thousand Dolls—but her own life.

I hate being disappointed with books I’ve hyped up in my mind. I really, really hate it. Pretty sure I docked at least a half star on my rating of this one just for that fact.

The books opens up telling us about Nisha, a girl who is a servant for the Matron of the City of a Thousand Dolls. This city is where the citizens of her country send their unwanted or orphaned girl children, since the country has a 2 child policy and people usually want to keep their boys. Within the city there are houses that teach girls special skills, from pleasure to medicine. Nisha is not in any of the houses, but is just a regular servant. Her only chance at having a future is if someone randomly decides to buy her as a wife at the coming ceremony where girls are bought by employers or husbands. Thankfully, she’s managed to get a nobleman’s son to fall in love with her–despite the fact that it’s forbidden–and her best friend is going to be the wife of the Crown Prince. Oh, and her best friends are these cats that talk to her. She’s pretty much set, really.

But then two things happen: one, this ugly mean old guy decides that he really, really wants to buy Nisha to be his slave. Two, girls in the City start getting murdered. Nisha gets the buying of herself delayed in exchange for trying to solve the murders.

I think the thing that bothered me the most about this book is that it actually wasn’t about the murders, but rather it was about Nisha. It took a real backseat to bigger reveals about Nisha’s parentage, history, and the other secrets she uncovers besides the murders. In fact, the biggest contribution that Nisha makes to the murder is a mistake and a horrific accident–both of which have huge consequences for her. This book felt more like a personal struggle with identity then a murder mystery, and that wasn’t what I’d signed up for.

Also, shout out to those talking cats. They were a huge, focal point of the book, and they came right out of the blue. They also clearly knew all the answers to everything Nisha needed to know, but they had to stay silent because of a promise they made to their cat god. If the cats had just told Nisha about her parentage in the beginning, this novel could have actually been about the murders as promised.

Also, that forbidden romance that’s mentioned? Not much of a plot line. Really, it’s more jammed in there at certain moments. I’m halfway certain that it’s biggest contribution is the “emotional twist” it creates at the end. (I have quotation marks because you can see it coming from a mile away. Like, page one, really.)

It’s sad, because I really enjoyed the world building in this book. The world Nisha lives in seems like a pretty fantastic place to set a book. Forster even tried to add in a larger political angle, which I appreciated, even if it was shoehorned in. I know there are many interesting stories that exist with the walls of the City. The characters weren’t bad, even if they did feel a bit flat. But the plot dragged on and the “twists” were weak and the ending was so saccharine sweet it hurt–not to mention didn’t leave me grabbing for the next book. Every clue in this “mystery” was so obvious it almost felt like the story was being dumbed down.

All in all, this book was just disappointing. Even worse, this was my first pick for book club, and I know there are people in the group who don’t really like ya. It just wasn’t a good showing overall. If I can get an ARC of the next book or I win a copy, then I’ll read it eventually, but I won’t be shelling out anymore money for this series.

Want to hear the rest of my opinions, and that of the other Bibliomancers? (It gets …  insane…) Watch the video below!

3 thoughts on “Bibliomancy for Beginners: Review and Hangout Video for “City of a Thousand Dolls” by Miriam Forster”