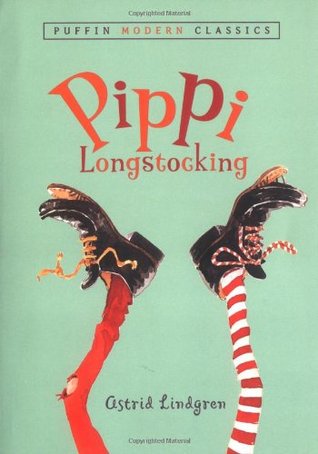 Tommy and his sister Annika have a new neighbor, and her name is Pippi Longstocking. She has crazy red pigtails, no parents to tell her what to do, a horse that lives on her porch, and a flair for the outrageous that seems to lead to one adventure after another!

There is nothing more terrifying than reading a book you know your teacher adores but you instantly know from the first page you … won’t. That’s what happened to me with this book.

I had never read Pippi before this class that I took this year. I had watched the animated tv show that was on a while back, and maybe one movie, so I was familiar with the general storyline. I just wasn’t aware how much the creators of those programs had made Pippi likeable. Because let me tell you, she is NOT likeable in the book.

My mother might tell you that this is completely hypocritical, but I cannot stand screaming and belligerent children. Pippi wants to be the Queen of the Pirates, but what she really is would be the Queen of the Spoiled Brats. Even to her two little friends, she isn’t exactly the nicest person.

Another problem that I have with the book is that it’s incredibly episodic. Each chapter is a new “adventure.” Many of the books I’d read up to this point in this class had been like this, but the problem is that Pippi never learns anything. She just keeps getting more and more belligerent as the stories go on.

I will say that I suppose if I were younger this book might seem whimsical and fun. When you’re a kid you don’t have the “ugh spoiled brat” hang up that my apparently older and jaded self does. But Pippi is just so downright mean at times that I can’t see wanting to be her friend.

So tell me: did you read this book as a kid? Did you like it? Do you like it now? Someone help me with a bigger picture!