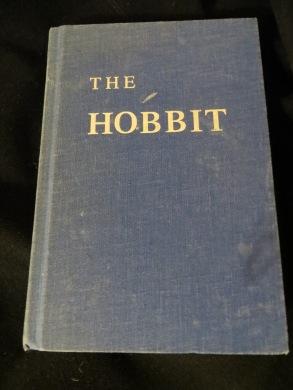 This is my copy. Smudged and paint-smeared, without its dust jacket, but still alive!

I was really torn when the Hobbit movie came out.  On the one hand, the Lord of the Rings was undeniably one of the best book-to-movie transitions I’ve ever seen, so I figured they would do well with the Hobbit.  (Although ask me sometime about my quibbles with the Hobbit movies.  We’ll have fun.)  I was worried that, having seen the movies, the images in my head when I read the book–images that have been in place since I was eight years old–would be replaced by the faces from the movie, and I’d never get my Bilbo and Thorin and Bard back again.

See, I read Lord of the Rings AFTER the movies came out.  I hadn’t seen them–I was determined not to see them until after reading the books, which is of course the proper bookworm behavior–but anybody with eyeballs had seen pictures.  Movie trailers, posters, calendars, prop replicas.  I had images in my head before I went into the books.  For the Hobbit, I had no such thing.  It’s all me.

I first read it when I was eight.  I don’t exactly remember the context under which I picked it up, although I feel like I can thank my mother for this one too.  Weirdly enough, I didn’t find it at all dense; I honestly enjoyed it.  (For an awkward few pages at the beginning I was convinced that a Hobbit was some sort of non-anthropomorphic hole-dwelling creature, possibly one that lived in a shell, since my copy had already been divested of its dust jacket and the only cover image I had to go on was this odd, wiggly-looking graphic

I have no idea what this wiggly thing is.

on the spine.)   I made up tunes to go with the songs.   I immediately started begging for copies of Lord of the Rings, although once I got them I got to the scene with Old Man Willow–the one where all of the main characters in existence at that point are nearly absorbed by a tree–and was terrified into stopping for several years.  (Yes, I was scared of a tree.  Not the black riders, or the ring.  Hey, it’s a scary tree.)

The Hobbit was my introduction to Middle Earth–benign enough to be a children’s story, but complex enough that it had something to offer in later rereads as well.  As the paint-smudged cover of my copy indicates, it has been well-loved.

I went to see the first movie with a great deal of trepidation, but the minute Bilbo and Gandalf started talking circles around ‘good morning’, I was so caught up in the utter, delighted nostalgia of seeing MY CHILDHOOD on the big screen in front of me that I completely forgot to worry.  Every single familiar line or iconic sight was greeted with delight.  The Riddles in the Dark scene, in particular, is one of my favorite things Hollywood has ever done: it looks JUST HOW I IMAGINED IT.  Well, except for a bunch of things that are different, but it’s close enough that it still feels like someone catching my childhood imagination on camera.

There were also a lot of stupid things about the first movie, but I was too busy being nostalgic to care.  (The second movie I’m more lukewarm about, although Smaug remains awesome.)  Afterwards, though, I started getting worried again.  What if I would only ever see Martin Freedman’s face when I picked up the book again, instead of the Bilbo I had imagined for most of my life?

I went home and reread the book, cover to cover, in an afternoon.

I shouldn’t have worried.  The images were exactly as they’ve always been.  They are–thank God–too deeply embedded in my childhood psyche to be shaken by three hours of screen time.  It’s good to know that even my brain, nonvisual though it usually is, will hang onto these images for me no matter what else I decide to stick in my head.   It’s good to know that no matter what, when I open the book again and decide to go back, the same sights and sounds and feelings–relics from child’s imagination, which everyone knows is better than a grown-up one–will be waiting for me.