This is it. One last trip before we head home in eleven days. I can’t believe it. However, Sam and Madison and I were hardly going to be daunted by a lack of time and an influx of homework when the chance to travel to Barcelona, Spain, came up!

In a nice change, we left for Spain on Thursday night instead of Friday morning. This meant that moving into our hostel bunks while everyone else was asleep was a bit difficult, but it meant that we had the whole weekend to really sink our teeth into the city.

In the morning, we met up with a friend from the home campus who’s spent the semester

in Barcelona and ordered him to show us the sights. It was threatening to rain, but we gamely hopped around the city (dear Metro, how I love thee). One of our first stops was a market, so that Madison could replace the purse that had broken the night before. It was the strangest market we’d ever been to. You need antiques? Toilet seats? Underwear? They got it. (And Madison did find a purse.)

A few more bops on the Metro put us at the base of the National Catalan Museum of Art, which is really high up on a hill with a great set of fountains in front of it. We huffed and puffed our way up to the top and were richly rewarded with a view of the city. As we sat down to enjoy it, I just about started crying. Everything is coming to an end, and yet I’ve been so, so lucky this semester and in that moment I just felt ALL OF THAT. The guy singing on his guitar was also cool (especially when he sang “Legalize All Weed.” How … odd).

We did a bit more running around, past a few cathedrals, into a few more markets, until

we finally got hungry enough to go get dinner. Though it was getting dark, we decided to buy some cheap bubbly and head down to the beach. I’ve never written a bucket list, but if I had “drinking on the shore of the Mediterranean” would totally have been on it, and now I can scratch that off. It was a fabulous night. 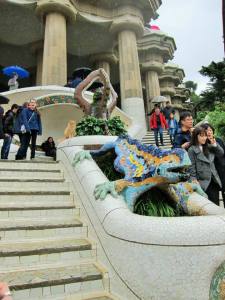 The next day was the one filled with the most scheduled fun. We had bought tickets to Park Guell the night before, and were not disappointed despite the rain. It cleared up just enough for us to be able to enjoy roaming around all the Gaudi art and gorgeous flowers. I’d never seen anything quite like it.

After that we shot over to the Sagrada Familia, which we

did not go inside because tickets were hella expensive and it was undergoing major renovations anyways. We stopped in the rain just long enough to snap a few pictures, and then used our prime tourist location to scope out some gifts and postcards. We needed to take up time before heading back to the National Museum. Why?

We are the masters of “free is in the budget,” and this trip was no exception. We climbed all those freaking stairs again to get in to see a bunch of art for free. Which was great, because we all agreed we wouldn’t have wanted to pay for it. We all had this really disgusting moment where we went “You know, I’ve seen better.” Yes, only after this semester can I say that while looking at prime pieces of medieval and romantic art. No big deal.

After that, it was time for tapas. SO MUCH TAPAS. I wish this would catch on a little bit more in the US, because guys this is the best way to eat. Why have one thing when you can have seven for cheaper? After that, it was another early night for us.

for free (more on that later). We did some more shopping, stopped by the Joan Miro park to see some questionable art, found a fantastic candy shop called Happy Pills and discovered a few more cathedrals. What was worth all this wait?

GETTING INTO THE MUSEO PICASSO FOR FREE.

That’s right, ladies and gentlemen, the Museo Picasso is free after three on Sundays and we took full advantage of it. This is one museum we would have been willing to pay for, but THANK YOU BARCELONA FOR BEING AWESOME. So many of his most famous works are in that collection, and it was absolutely amazing. Sadly, we weren’t allowed to take pictures so here’s a Picasso (the singular Picasso) from the National Museum.

timetable, so we found a bar close by and tried out some real Spanish margaritas and mojitos. I had a couple of fantastic strawberry margaritas. As far as I can tell, their recipe is 98% tequila and 2% anything else.

What was for dinner you ask? MORE TAPAS OF COURSE.

Then, early the next morning, that was it. Back to London and all the homework we didn’t do but should have done.

I can’t believe that the next time I get on a plane, it will be to the States. I can’t believe how soon that is. I just … can’t. This semester I’ve been to five countries outside of England, and visited Stratford-Upon-Avon and Cardiff besides just LIVING in LONDON. Maybe in a few posts I’ll be able to process that all, but for now? I have 11 days left and I have to make them count.

2 thoughts on “Such Oddness, Much Wow (Otherwise known as Barcelona)”