Alright, enough messing around. I’ve started reading hardcore for this second chapter. The goal is to have the draft done by spring break. …we’ll see if that happens. This is going to be a really brief post, since I’m still hashing so many things out, but I wanted to share some of the sources I’ve found along the way with you guys. I may be the only one this fascinates, but if it doesn’t … well, this is for you.

First up is actually a TEDTalk by the fabulous Chip Kidd. He designs … so many book covers. He’s probably designed a lot of things that you’re familiar with. He has a few talks on the subject, but this is one called “Designing books is no laughing matter” – and it’s really quite funny and enjoyable!

I’ve also found a couple of books related to the design and study of book covers. The first is called By Its Cover: American Book Cover Design by Ned Drew and Paul Sternberger. This book focuses on the history of American book cover design, from the first book jackets to “postmodern” book design. It was published in 2005, so it’s not extremely recent, but I picked it for the historical overview it provides.

I’ve also got Judging a Book by Its Cover: Fans, Publishers, 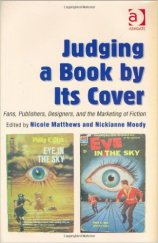 Designers, and the Marketing of Fiction, edited by Nicole Matthews and Nickianne Moody. This is a collection of essays from different people about how the book cover has been approached over the years, what makes a book popular, how books connect with films and internet and–my favorite–how to market to moving-target audiences like young adults.

There’s also this giant textbookish thing from McGraw Hill that I have called Young Adult Literature in the 21st Century by Pam B. Cole. The kind of material in it is getting less and less relevant as my topic shifts, but it looks impressive in any case.

Speaking of irrelevant, I also picked up this really cool book

called Names and Naming in Young Adult Literature by Alleen Pace Nilsen and Don L. F. Nilsen. I don’t think I’ll be using it anymore, but I’m still interested in reading it. It’s all about how different character names and book titles function for different effect. Naming things is very important to me, even if it isn’t to this thesis anymore!

I do, of course, have plenty of other scholarly articles and stuff, but I don’t want to bore you with all of them now. I’m literally reading the theses of other people and collecting my own data from YALSA lists and cover art searching. I’m making Taylor take me to a Barnes and Noble for PURELY RESEARCH REASONS. I just thought I’d share what I have in book form, it case you were at all interested!

Maybe next week I’ll be out of my panicked funk enough to explain to you what the hell happened with this second chapter. Maybe I’ll even know.