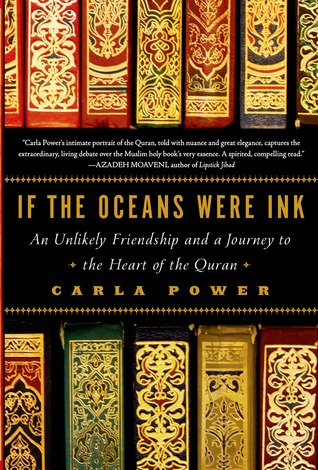 If the Oceans Were Ink: An Unlikely Friendship and a Journey to the Heart of the Quran by Carla Power

If the Oceans Were Ink is Carla Power’s eye-opening story of how she and her longtime friend Sheikh Mohammad Akram Nadwi found a way to confront ugly stereotypes and persistent misperceptions that were cleaving their communities. Their friendship-between a secular American and a madrasa-trained sheikh-had always seemed unlikely, but now they were frustrated and bewildered by the battles being fought in their names. Both knew that a close look at the Quran would reveal a faith that preached peace and not mass murder; respect for women and not oppression. And so they embarked on a yearlong journey through the controversial text.

A journalist who grew up in the Midwest and the Middle East, Power offers her unique vantage point on the Quran’s most provocative verses as she debates with Akram at cafes, family gatherings, and packed lecture halls, conversations filled with both good humor and powerful insights. Their story takes them to madrasas in India and pilgrimage sites in Mecca, as they encounter politicians and jihadis, feminist activists and conservative scholars. Armed with a new understanding of each other’s worldviews, Power and Akram offer eye-opening perspectives, destroy long-held myths, and reveal startling connections between worlds that have seemed hopelessly divided for far too long.

Up until this point, I haven’t been too impressed by the books that I’ve been reading for my Spiritual Journeys class. Stephen Dubner’s Choosing My Religion was written poorly and lacked much depth. The second book, Monique and the Mango Rains by Kris Holloway, was even more surface level with a hidden amount of white privilege on top. I still haven’t finished the third one due to missed classes.

This book, however, changed everything. Here, at last, was the deep kind of inter-religious engagement that I had been looking for all this time, with an author I trusted to do the subject justice.

I did not believe that Carla would be the right narrator in the beginning. She opens the book with the story of her early years, living around the world with her family in Egypt and Afghanistan and India and all these other places, while her father collected artifacts. My stomach dropped when I thought that she was going to believe herself worldly enough to have these discussions because she’d been places and seen things in a very privileged fashion.

Instead, she directly confronts her privilege. She calls out her past self for thinking that she knew a lot about other cultures and other religions even though she had never really engaged with them deeply. Throughout the book, she is constantly admitting her to own biases and beliefs and using them to challenge her own way of thinking–and the reader’s. Instead of feeling as though I was listening to someone who thought they were an authority on the subject, I truly believed I was listening to the genuine journey to understanding of someone with an academic background of knowledge in Islamic religion and culture. That, on it’s own, is priceless.

Then there is the nature of the man with whom she takes this journey, Sheikh Mohammad Akram Nadwi. There is never any moment when either of them use his opinions as an end-all-be-all answer for all Muslims. Instead, we are led to a deep understanding of how he views the Quran the way he does, but also how others view it in different ways. We are never made to feel as if his answers are the “best” ones, though I grew to have a deep respect for him and his ideas.

A great deal of this comes from the fact that, while there are a lot of surprising places where Power and the Sheikh are in harmony, there are many places where they are not. The book does not shy away from these things, and instead investigates them on both sides. Sometimes, it is Power who showcases a shift in her worldview. In others, the Sheikh himself changes his opinion. It is a genuine dialogue of give and take.

I took this class in order to deepen my knowledge of other religions, and for the first time with these books I feel like that has been accomplished. Not only do I feel educated about some of the finer points of Islam and the Quran, but I have also come to an understanding of how the Quran can be interpreted and what it means to a variety of different Muslims. I also recognized myself taking a similar journey to Power while I was reading. I appreciated her blunt honesty with herself and her worldview, because it kept me from narrowing mine. If this is a topic that you are interested in, I completely recommend picking this up.

3 thoughts on “Review: “If The Oceans Were Ink” by Carla Power”