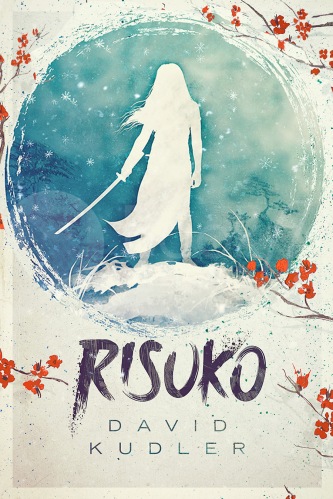 Risuko: A Kunoichi Tale (Seasons of the Sword #1) by David Kudler

Can one girl win a war?

My name is Kano Murasaki, but most people call me Risuko. Squirrel.

I am from Serenity Province, though I was not born there.

My nation has been at war for a hundred years, Serenity is under attack, my family is in disgrace, but some people think that I can bring victory. That I can be a very special kind of woman.

All I want to do is climb.

My name is Kano Murasaki, but everyone calls me Squirrel.

Though Japan has been devastated by a century of civil war, Risuko just wants to climb trees. Growing up far from the battlefields and court intrigues, the fatherless girl finds herself pulled into a plot that may reunite Japan — or may destroy it. She is torn from her home and what is left of her family, but finds new friends at a school that may not be what it seems.

Magical but historical, Risuko follows her along the first dangerous steps to discovering who she truly is.

Kano Murasaki, called Risuko (Squirrel) is a young, fatherless girl, more comfortable climbing trees than down on the ground. Yet she finds herself enmeshed in a game where the board is the whole nation of Japan, where the pieces are armies, moved by scheming lords, and a single girl couldn’t possibly have the power to change the outcome. Or could she?

Thanks to NetGalley and Stillpoint Digital Press for this eARC! This title will be available on June 15th, 2016.

If you read that blurb, like I did, you might be under the impression that a lot happens in this book. It doesn’t. This book was a constant push and pull for me, where I really wanted to like it … but nothing ever really happened. While Risuko was an interesting character, the cast around her fell flat and the overall plot seemed underdone. I was intrigued by the world and the overall politics, but they were never dealt with overmuch. All in all, this book had all the elements–it just didn’t use them.

The book certainly opened up in a promising manner. You briefly see what Risuko’s life is like before she is abruptly sold to and spirited away by an older noble lady. This lady says that she will be teaching Risuko to become a miko, or shrine maiden, but her other traveling companions hint that this is not the case. While on the way to her new home, their traveling party is attacked by the forces of a neighboring warlord and Risuko is instrumental in helping to save the day. By the time the whole party arrived at the training facility, I was ready for an action packed book like the opening I’d just experienced. The stage was set for a politically complicated plot with an interesting cast of characters.

The problem is that it all goes downhill from there. I understand that there does need to be a training period for Risuko, but the confusion that she exhibits during her training is extremely frustrating to a reader. For goodness sake, this book is called “A Kunoichi’s Tale” but the nature of what a kunoichi is–and the fact that Risuko is not actually training to be a shrine maiden–is supposed to be one of the huge reveals of the climax. That’s not even a spoiler because it was so obvious.

While that may be overdone, other aspects of the plot are underdone. While she is training, some “fox spirit” is clearly searching through the camp, stealing things, and poisoning people. This is supposed to be the major mystery of this book, but it falls flat. For one, the way it unfolds makes very little sense. For two, the cast of characters does not support it at all.

This is a larger issue with the huge cast of characters. There are a lot of them, and there is very little depth. Most of them were pretty interchangeable and unnecessary to me. Therefore, when a character or two is put forward as a red herring, I don’t believe they’re the culprit because I don’t know they’re motivation. When the actual culprit is revealed, I still don’t understand their motivation. It just kind of happens.

The larger political, world changing plot that’s hinted at in that blurb does not exist. It’s hinted at, but in a way where it is being introduced for the next book, not actually useful for this one. This book is Risuko training, catching a thief, and finding some stuff out about her past. That’s it.

That said, I left this at 2 1/2 stars because there was something weirdly compelling about this novel. It may well have been just the fact that I kept waiting for something to happen, but I couldn’t stop reading it. I planned to finish it over four days, but I actually did it over two. Kudler’s writing hooked me in a way that I can’t explain. All of the elements for a fantastic story were there, just not fleshed out to any kind of satisfactory level.

If this book sounds like something you’d enjoy, I’m going to suggest waiting for book two. While, obviously, I haven’t read it yet, I feel confident in saying that so little happened in this book that you could probably start with the next one and only be missing a small bit of exposition. While I will not go out of my way to read the next one, I am interested enough in the story that I might request the sequel if I see it on NetGalley. We’ll see if that one can live up to the potential that this one missed.