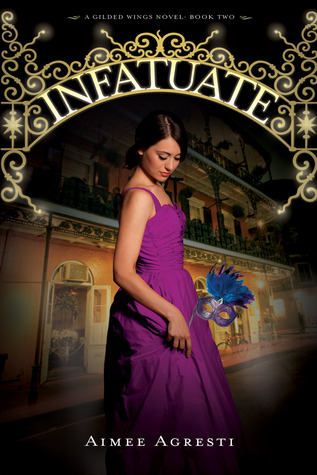 Haven Terra is still recovering from an internship that brought her literally to the brink of hell when a trip to New Orleans leads to more trouble. Graduating early from high school leaves the spring semester free, so Haven and her friends Dante and Lance head to the Big Easy to volunteer with community service projects. But their true mission becomes clear when they run across an enclave of devils known as the Krewe. New Orleans is a free-for-all for these shape-shifting devils, who are more reckless and vicious than any Haven, Lance, and Dante have encountered. And they soon discover their French Quarter housemates are also angels-in-training, and together they must face off with the Krewe in their quest for wings. But Haven’s resolve is tested when Lucian, the repentant devil with whom she was infatuated, resurfaces and asks her for help escaping the underworld. Can he be trusted? Or will aiding him cost Haven her angel wings—and her life? Thrilling, romantic, and full of surprises, this gripping sequel to Illuminate takes the battle of good and evil to the next level.

Thank you to Harcourt Children’s Books for this ARC! This title is now available.

Note: This review WILL contain spoilers for the first book in this series, Illuminate. Read my review of that one HERE.

I did it again. I don’t know why I did it again, but I did. I got really bored in the middle of Illuminate, but I had such high hopes for this one that I just had to try it out. I basically just got more of the same.

The book starts out with Haven, Lance and Dante graduating early. They decide that instead of just hanging around til college starts, they’re going to go on this volunteer thing to New Orleans. A change of setting is just what they need after everything that happened in Illuminate. Clearly, they don’t understand that these guys just shouldn’t do internships.

The book takes a really long time to get to something we already know: everyone else on the trip is an angel-in-training. Until that point, they moseying around New Orleans, being good Samaritans and meeting creepy people. I couldn’t really see anything different between the demons the trio fought in Illuminate and the new troupe of demons, except for the fact that these guys were shape-shifters. That isn’t really a big deal, plot wise. From there, the plot continued to follow suspiciously closely to the first book. Haven realizes something’s wrong, she and Lance and Dante investigate, they save the day. Less fire in this one, though.

Another big problem I had with the first book is that little all knowing voice that would pop up and tell Haven exactly what was going on. In this one, Haven has TWO of those sources: the angel trainer, who’s gotten with the technology age and gone to a cell phone text, and Lucian, who can’t leave this one house because that’s where he can appear in ghost form, who’s always leaving her letters explaining just what’s going down in the underworld.

Haven and Lance also have these cliché middle book relationship problems that seem just disjointed. In the end, it just seemed like a plot device so Haven would actually go hang around Lucian a little bit longer. I didn’t buy it. On the other hand, Dante gets a real romance and it’s ADORABLE.

I left this rating at 3 stars, though, because this book DOES have a lot more action in it then Illuminate. There are a lot more magical powers (though Haven loses her original powers because her powers are growing, what?) and action in general. It made a serious attempt to move faster than the first book, which I can appreciate. In places, it was actually a really fun ride. The characterization still continuously falls flat, however, and the deus ex machina really needs to quit. If you enjoyed Illuminate, give this one a go, but don’t go out of your way to get into this series. 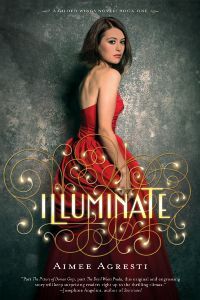 “Who lives in a hotel? Only rock stars and celebrities and maybe these messed up starlets who, like, divorce their parents…”

…and now, straight-A suburban high school student Haven Terra. She moves into Chicago’s swanky Lexington Hotel for a prestigious internship shadowing the powerful, alluring, and startlingly young owner, Aurelia Brown. Here, Haven has her first taste of decadence as she meets the city’s A-listers, works alongside Aurelia’s stunning minions known as the Outfit, and frequents the hotel’s exclusive nightclub.

In her old life, Haven was ordinary. But at the Lexington, she’s being transformed–and being pursued by Lucian Grove, the guy of her dreams and Aurelia’s second-in-command. As Haven begins falling for Lucian, she discovers that the beautiful people on the Lexington’s staff are not quite what they seem–and that they have a horrifying plan in store for the hotel’s unsuspecting guests. Aurelia and company are in the business of buying souls. Will they succeed in wooing Haven to join them, or will she rise up and fight back in time to save her classmates on prom night at the hotel?

Captivating, romantic, and suspenseful, Illuminate is an exciting saga of a teen’s realization of her extraordinary destiny.

Okay, I just want to call this book out RIGHT HERE. Note the words in the last line of the blurb “suspenseful” and “exciting.” This book is 534 pages that it doesn’t need to be because it is NOT suspenseful or exciting in a lot of places.

Jumping right into the criticism, I just have to let you know this important thing. I picked up this book because I want “YES, BIG BOOK” since I read really fast and always like books I can read for more than a day. The problem is, this book is WAY TOO BIG. Seriously. The pacing in this book is really wacked out, and the editing also strange. If Illuminate had been half the size (or smaller!) it could have been a really awesome read for me, a higher starred one to boot. But this book GOES. SO. SLOW. I literally started skimming.

The fact that I finished this book is actually a fluke, because usually I wouldn’t have. I’ll admit that there was something compulsively keeping me reading. The prose was rather purple-y and overdone–further slowing down the already slow plot–but in some places it really did click and work and be awesome. Flashes of action would crop up and also be awesome, but that’s all they were, flashes. Flashes of action is not actual action, people. Now, this point of discussion would naturally lead me to my feelings about the ENDING of this book, but I am getting ahead of myself. I want to pick apart a few things first.

Haven: Our main character is supposed to be a protagonist. You know, like PROactive, PROgressive, stuff like that. But the problem is, she isn’t. The entirety of the plot–when it does move forward–seems to be happening around her. The reason she starts doing ANYTHING besides falling for Lucian, sleeping and taking photos is because she finds this notebook that tells her everything to do. It’s kind of aggravating, especially when Aurelia and everybody start freaking out because Haven’s powers are growing and she’s effecting the photos but HAVEN ISN’T DOING ANYTHING. She isn’t any different, she isn’t even trying to be magical. It just … happens. Kinda like everything else in the plot.

What in the world is going on in this book? I’m not kidding! The blurb tells you that Aurelia and crew are stealing souls, but what is Haven’s role? What’s her job? What kind of lore are we dealing with? I was asking these questions–these IMPORTANT questions–all the way up until about halfway through the book! You don’t even find out what the deal is with Haven until later than that. I understand that since this is the first person and Haven is clueless she can’t exactly TELL us, but geez. It was quite distracting.

And then when things actually happen… It doesn’t seem to FIT. For instance, when Haven finally figures out Lucian, I wanted to shout NO, REALLY? Because this, I had guessed. From about page one. And then when things start rolling and some plot points are explained I went, WAIT WHAT? Because they happened too fast for me to get a handle on them.

However, however, I do admit, I adored a few things…

The character of Dante was awesome. I was upset we got to see him so little in the middle of the book. The Lance/Haven thing was also cute, because they took time to get to know each other, trust each other and THEN fall in love with each other. Major plus in my book. I spent so long on criticism I feel bad I don’t want to prattle on too much here, but yeah. Those were two major points for me!

Now … the ending. THERE WILL BE NO SPOILERS HERE, even if it kills me. That would be silly. However, I must saying, things REALLY got rolling here. I actually started laughing out loud for a little bit. It was like, after 500 pages of blah blah blah all of a sudden it went EVERYTHING is GOING TO HAPPEN, THE END. I truly did enjoy the ending, though it ended pretty abruptly after what I was used to.

In a nutshell, this book was … something. It was really slow for ages, then really fast for about 20 pages and then you were at the end. If you are the kind of person who reads books were something NEEDS TO HAPPEN then I would avoid this one. However, if you don’t mind slower reading and a slower reveal of plot points then you might find this one enjoyable. Though I did finish this, it really wasn’t quite the right fit for me–a fast reader with a short attention span.