Last month, when I found out there was going to be a Cassandra Clare, Holly Black and Sarah Rees Brennan signing somewhat in my area, I decided I HAD TO GO. Usually I can’t find anyone close to me other than signings at Books of Wonder in NYC, which–while I’m sure is a perfect nice store–IS IN NYC. Just the trip alone there might kill me. So when I heard about this one, I happily told my father that there was a signing not six hours away from my house, but closer!

It was only four.

Luckily for me, I had a birthday coming up (18, that’s a big one, you guys may remember…). For a present, he gave me a gift certificate for his helping to drive me there and back. (That’s four hours ONE WAY, folks.) And yet, yesterday morning, he continued to go, until the moment we left:

“You sure you want to do this?”

“THEY ARE LIKE MY BEATLES. MY ELVIS. MY BRUCE SPRINGSTEEN.”

Thankfully, we did eventually get out the door. Traffic, however, did not help ANYTHING. We were stuck in so much stop and go traffic all the way down that our hour early plan turned into a fifteen minutes late plan.

But still, we made it to our destination: Oblong Books and Music in Rhinebeck, NY. (Website | Facebook) 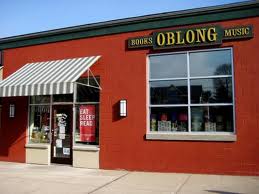 Unfortunetly, my lateness meant I’d missed all of Holly’s reading and most of Cassie, but I did totally get to hear Sarah reading from Unspoken. While the excerpt was excellent, it was made THIRTY TIMES BETTER by Sarah’s acting out of the scene, including an almost strip tease. 😉 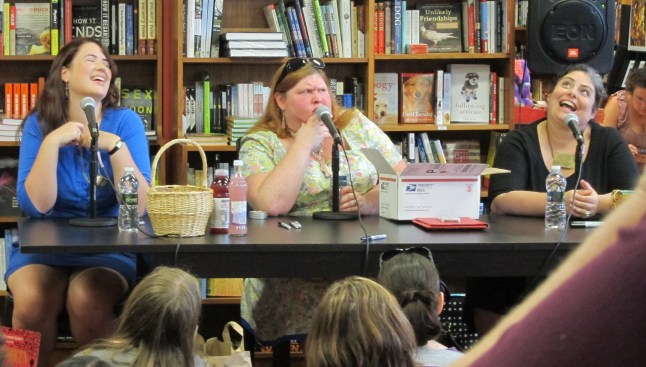 A Q&A session followed, that was ridiculously entertaining. I didn’t get a chance to live tweet it as much as I wanted because I was laughing so hard, but I did get a chance to get a few of them in! I’ll just insert my screen shot here below… 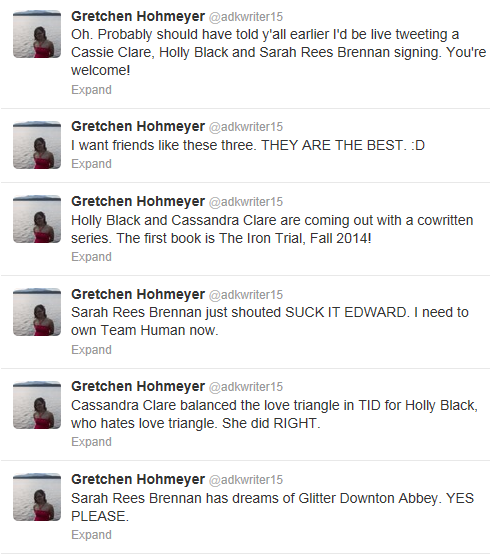 After that came the signing! Because I was so late, I was literally THE last person in line out of a crowd of over 100 people, so I sat around waiting for a long time to get mine signed, but it was totally worth it. I got pictures with every one of them! (Also, remember, FOUR HOUR CAR RIDE. This is why I look like a wreck. Also, love my Team Jem shirt? Apparently I was like THE ONLY Team Jem member representing. SAY WHAAAAT?)

All in all, I got 3 books signed by Holly (my Modern Faerie Tales set), 3 books by Cassie (City of Glass, Clockwork Angel and Clockwork Prince) and 1 book by Sarah (Team Human). Allow me to show off a few of my lovelies…

And there you have it! My VERY FIRST author appearance post for the blog! I was fangirling the whole night long, and these guys were so fantastically nice and funny. I wish I could have just sat down with them longer and listened to them tell the funny stories about each other. They are three of my IDOLS, and I couldn’t believe my luck that I got to be near them for a just a few minutes. As you can tell, I’m a little out in the middle of nowhere where book signings (and freaking anything else) are concerned. When I got home I basically passed out from exhaustion, but it was SO WORTH IT. 😀