Welcome to the cover reveal of Born of Deception by Terri Brown! You might remember the first book, Born of Illusion, from my review a while back! If you don’t, that’s fine. Click on that link! Now, let’s get started with the awesome. First, let me tell you a little bit about Terri – and her giveaway message for you!

I’m not sure who to tell you about here because I’m actually two people rolled into one. As a responsible mother of teens, I show one persona to the world. That person is driven, conservative and level headed. But the other part of me just never grew up. She is rebellious, impulsive and curious.

It’s hard being both these people. They’re often at odds.

The mother part of me knows I should put a cap on how many animals we take in. The teen part of me wants to save them all. We have five cats and two dogs. Who do you think is winning?

Even now. The mother part wants to make a meatloaf, mashed potatoes, and a tossed salad. The teen part wants to order a pizza, work on my website and check my Facebook.

Luckily, though my two halves don’t always agree, both of us live happily in Portland, Oregon, with a husband and too many animals. And we both love to write and write and write..
Twitter: https://twitter.com/teribrownwrites
Facebook:https://www.facebook.com/teri.foremanbrown
Website: http://www.teribrownbooks.com/
Now. Are you ready for the cover? HERE WE GO!
END_OF_DOCUMENT_TOKEN_TO_BE_REPLACED
Advertisement

Ready for the cover reveal for the sequel to Rush by Eve Silver? I am! There’s even an ARC giveaway at the bottom! Now. ARE! YOU! READY?

END_OF_DOCUMENT_TOKEN_TO_BE_REPLACED

Like Loading...
Daughter of Isis (Descendants of Isis, #1)
by Kelsey Ketch
Release Date: 10/26/13
Cover Designed by: Steven Novak
Summary from Goodreads:
“Her mouth parted slightly, waiting for Seth to breathe life into her own body, just like in the story. She wanted him to awaken her senses.”
Their worlds collide in California’s high desert.
The last thing Natara “Natti” Stone wants to do is to start anew at Setemple High School. She wished she had never left London. Yet the brutal murder of her maternal grandmother has made her life very complicated. The only clue related to her murder is an ancient, encrypted necklace Natti discovered after her grandmother’s death. And if trying to adjust to American life is not enough, Natti is being stalked by a mysterious, charming high school senior, Seth O’Keefe, who is annoyingly persistent in his attempts at seduction.
Seth O’Keefe is secretly a member of the Sons of Set, an order that worships the Egyptian god of chaos. Seth’s blessing from Set, his “charm,” never failed, except with one person: Natti Stone. Her ability to elude him infatuates and infuriates him, and he becomes obsessed with the chase. But the closer he gets to her, the more his emotions take a dangerous turn, and he risks breaking one of the most valued covenants of his order. The punishment for which is a fate worse than death.
The adventure this unlikely couple becomes engulfed in could cost them their lives and their souls.
*Note: Content for Upper YA*
END_OF_DOCUMENT_TOKEN_TO_BE_REPLACED

Today we are super excited to share the cover to WINGS, the third and final book in author’s Elizabeth Richard’s BLACK CITY series!

Check out this beauty!
END_OF_DOCUMENT_TOKEN_TO_BE_REPLACED

It’s time for another cover reveal, guys! (As hosted by A Tale of Many Reviews.) I am SO excited about this one. The novel, Vengeance Bound, is due out from Simon and Schuster on April 2nd, 2013, and the story looks a little like this…

The Goddess Test meets Dexter in an edgy, compelling debut about one teen’s quest for revenge…no matter how far it takes her.

Cory Graff is not alone in her head. Bound to a deal of desperation made when she was a child, Cory’s mind houses the Furies—the hawk and the serpent—lingering always, waiting for her to satisfy their bloodlust. After escaping the asylum where she was trapped for years, Cory knows how to keep the Furies quiet. By day, she lives a normal life, but by night, she tracks down targets the Furies send her way. And she brings down Justice upon them.

Cory’s perfected her system of survival, but when she meets a mysterious boy named Niko at her new school, she can’t figure out how she feels about him. For the first time, the Furies are quiet in her head around a guy. But does this mean that Cory’s finally found someone who she can trust, or are there greater factors at work?

As Cory’s mind becomes a battlefield, with the Furies fighting for control, Cory will have to put everything on the line to hold on to what she’s worked so hard to build.

SERIOUSLY? THIS SOUNDS SO COOL. Ahem. Anyways. (But you know it does. Seriously.) ARE YOU READY FOR THIS COVER?

I don’t know about you guys, but this is being added on to my Goodreads RIGHT FREAKING NOW!

You guys know how I love my cover eye candy. Well, boy do I have some gorgeousness to share with you today! But first, check out the synopsis so you can see JUST HOW AWESOME this book sounds and why you should be excited for the cover!

Seventeen year old Zoe Vanderveen is a GAP—agenetically altered person. She lives in the security of a walled city on primewater-front property along side other equally beautiful people with extended life spans.

Her brother Liam is missing.

Noah Brody is a natural who lives on the outside. He leads protests against the GAPs and detests the widening chasm they’ve created between those who have and those who don’t. He doesn’t like girls like Zoe and he has good reason not to like her specifically.

Zoe’s carefree life takes a traumatic turn.  She’s in trouble and it turns out that Noah, the last guy on earth she should trust, is the only one who can help her.

Now that you’re properly excited. LET’S DO THIS!

Hey guys! It is TIME FOR ANOTHER COVER REVEAL! Get excited! This one is for a really awesome series, The Grey Wolves, and I can’t wait to share it with you guys. But first, of course, I’m going to share the synopsis, just in case you’ve missed it. (For those of you who haven’t read the series, this may contain mild spoilers.)

Though the Serbian pack has been brought to heel thanks to the downfall of their Alpha, the war is far from over.
Desdemona, a witch of unfathomable power, has escaped the wolves’ wrath, but she will not go quietly into the night.  She takes refuge in a place where even the smallest sliver of light does not dare to enter. Though she had to flee, she has not given up on the treasure she wishes to acquire. Her depravity knows no bounds; she’s even willing to search for the one who can assist her in opening a Veil that has not been opened in millennia – with good reason: the danger is incalculable.

Meanwhile, there are major changes rippling through the Romanian Grey wolves. Decebel has become Alpha to the Serbian pack in an effort to begin to unite the Canis lupis species. Their numbers are dwindling in the wake of the shortage of true mates and lack of offspring. The wolves are beginning to lose faith and darkness seems to be crashing in on them from all sides. But the winds of change are blowing, changes that will alter the future of not only the Canis lupis, but of another ancient race as well.
Amidst all of this, Sally is continuing to come to terms with her relationship with the playful, charming, flirty, unbelievably handsome bartender – who happens to be a member of the Romanian pack.
If all that weren’t enough, the Fates have decided to pay a little visit to Jen. It’s time to collect. She cheated the Fates of a life, her life. Now they want what they are due. The problem? It’s more than Jen is willing to pay.
Yes, the war is indeed far from over. Bargains will be struck, declarations will be made, sacrifices will be given, love will be tested, and trust will be questioned as evil makes its stand against them all.

AWESOME, right? Of course it is! Now, let’s get onto that COVER! ARE! YOU! READY?

This is AMAZING, right? Get excited, guys! 😀

I’m really excited to be bringing to you guys today the cover reveal of Abbi Glines’ new book Options. It’s the first in a new YA urban fantasy trilogy. Fans of The Vincent Boys, Sea Breeze, Existence series and more, REJOICE! This book sounds AWESOME. Don’t believe me? Check this out:

Two paths.
Two completely different roads.
Each one standing before me.
Each one holding a different destiny.

Until now.
Until me.

Why am I different? I don’t know. But I’m going to see those roads and walk down each one. When it’s over I’ll know which one to choose because I’ll know my – options.

Now you’re really excited, right? Right? You should be. GET READY FOR THE COVER! 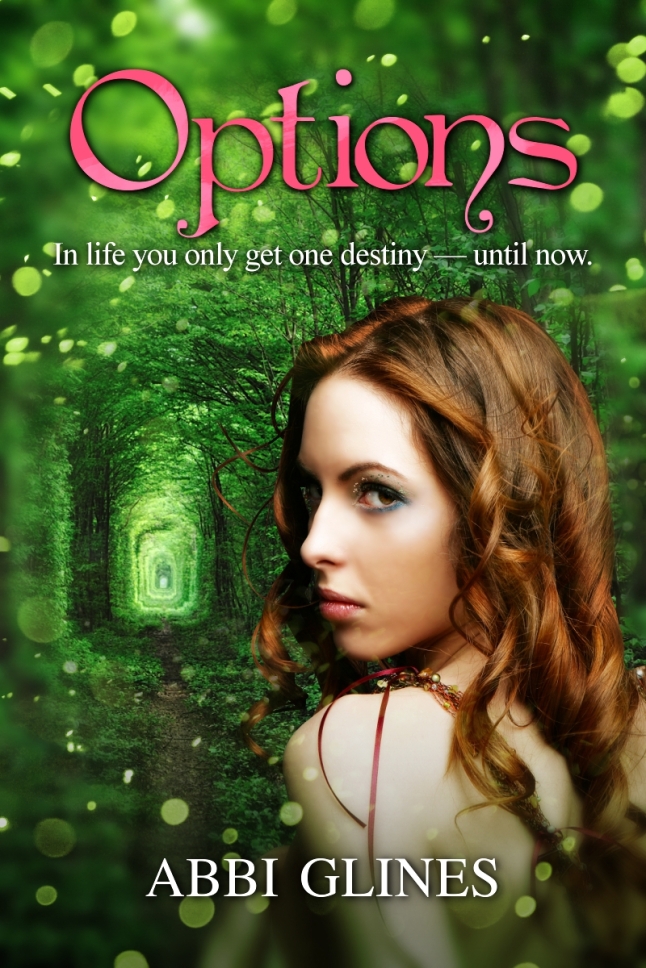 THIS. LOOKS. AWESOME. Don’t you agree? Tell me what you think about it in the comments! Don’t forget to add Options to your Goodreads to-read list! Click HERE to do so! You can also check out Abbi’s other titles on her website.

“Having already survived six years at the Tildor’s top military academy, sixteen-year-old Renee De Winter is determined to graduate, training day and night to compete with her male classmates. When the boys overpower her parries, she works harder.  When a bully sabotages her gear, she fights without it.  But when an underground crime group captures her mentor for its illegal gladiatorial games, she must choose between her career and her conscience.  Determined to penetrate the group’s inner circles, Renee will leap from academia to the crime filled streets, pick up a sword, and weigh law against loyalty.”

Are you excited yet? You really should be. Because, guys, this cover. Are you ready for this cover? Here we go!

ISN’T THAT AMAZING? I want her sword like you would not believe. Go, go, click the linkies to add it to shelves on Goodreads and Amazon! Then come back, because the author and Penguin have set up TWO awesome giveaways for you! That’s right, TWO!

Interested in entering? You should be. Click HERE to do so! (Please note that this giveaway is US only and ends June 15.)

GIVEAWAY #2 – For Teachers and Educators!

This awesome giveaway has The Cadet of Tildor themed SAT vocab cards. The author actually designed these herself with some classroom games in mind, which you can read about below (clicking the link will open a SNAZZY PDF). Then click HERE to enter!

The giveaways are now over!