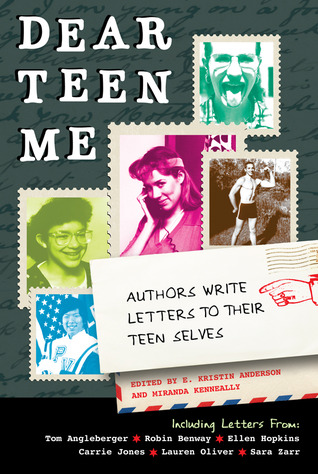 Dear Teen Me – An Anthology edited by E. Kristin Anderson and Miranda Kenneally

Dear Teen Me includes advice from over 70 YA authors (including Lauren Oliver, Ellen Hopkins, and Nancy Holder, to name a few) to their teenage selves. The letters cover a wide range of topics, including physical abuse, body issues, bullying, friendship, love, and enough insecurities to fill an auditorium. So pick a page, and find out which of your favorite authors had a really bad first kiss? Who found true love at 18? Who wishes he’d had more fun in high school instead of studying so hard? Some authors write diary entries, some write letters, and a few graphic novelists turn their stories into visual art. And whether you hang out with the theater kids, the band geeks, the bad boys, the loners, the class presidents, the delinquents, the jocks, or the nerds, you’ll find friends–and a lot of familiar faces–in the course of Dear Teen Me.

Thank you to Zest Books for this ARC! This book will be released October 30th, 2012

You may notice that this book has no rating. Certainly it will have to have one on Amazon, Goodreads and the like because they demand it, but Dear Teen Me is, to me, a book that transcends ratings.

What is a rating, anyways? It is a mark of sometimes good technical storytelling, other times it is because of a person’s simple like or dislike of a book. With Dear Teen Me, the former aspect especially holds no place.

Dear Teen Me is not a story. It is a conglomeration of personal, nonfiction stories about the teen years of dozens of YA authors. The concepts of “good technical storytelling” do not apply. The content is just not that kind.

I don’t know what I thought when I requested an ARC of this book. Whatever it was, I only know that the book exceeded my expectations. I was certainly expecting a great deal of “Were you an outsider in high school, because it’s okay to be weird!” and I got that, but not one of these stories was cheesy. Not one was a cliché of an adult trying to empower a teenager. The topics that these authors went over ranged from self-harm and eating disorders to coming out and dealing with abusive parents—and everything in between. Yes, every story had a happy ending and a moral, but you never felt like you were being told. All of the letters—though in some more than others—I felt as if I was intruding on someone’s most personal journal entry, and the that raw emotion on display was not for my eyes.

Dear Teen Me was not a book that I may have picked up of my own volition, simply because I am tired of books where “former teens” share their inspiring stories and tell you how to learn from them. I don’t want to hear inspirational “rah rah” stories meant to make me feel better about myself because it’s okay to be a broody teenager. The authors who contributed here seemed to understand that. No one is lecturing. No one is pretending that wounds leave no scars. No one is shying away from topics sometimes adults and teens alike are afraid of discussing. No one is censoring a thing.

And why would they? They’re writing these for themselves. For their mistakes. For their pain. They just happen to be gracious enough to allow them to be read by others.

It’s a TTT Rewind week! For this one, I’m fudging the criteria a little. I thought it was really cool to show what reviews are coming up on the blog when I did this on September 4, so I’m going to do it again! And tell me if you’d rather see it never ever again.

I actually haven’t read a dystopian in ever, so I’m really excited to take another dip back into it. This one just strikes me as different for some reason, and I hope it lives up to it’s expectations. Look for this one October 12th.

2. Meant to Be by Lauren Morrill

I have had this since JUNE and it’s KILLING me that I haven’t read it yet. But the release date still isn’t til November, so here we are a crapton of months later. Luckly, this review is finally coming October 19th!

This one has a really long title for not such a big book. But anyways. I have a physical copy of this sucker and I’m so happy because there are some high flying names in this one! I can’t wait to share it with you, even if I have no idea how to review it. This review will appear in some fashion on October 22nd.

4. The Messenger by Pamela DuMond

This book has, for some reason, switched titles and covers since I signed up for the blog tour, but I digress. This is the stuff Goodreads is using now, so don’t shoot me if it’s wrong. But, anyways, this is a blog tour and there will be a review and all will be discovered on October 25th.

I consider myself to be lucky to have an ARC of this, considering I never realized the release date had been pushed back to November and it just happened to show up amid the chaos that is the new NetGalley. Look for a review October 29th – just in time for Halloween!

This is the one and only book on this list that I have actually already read. Read a while ago, too. But I kept pushing it back for other scheduled blog tours and author interviews. I REFUSE to bump it ANOTHER month, so November 1st it is!

This is another one I keep pushing back, half because it was published ages ago and so I had to make room for newer releases and half because the reviews that came out all frightened me half to death. This should be interesting. Mark your calenders for November 2nd.

This is a new acquisition that I’m VERY excited about. It’s fantasy, but it’s also historical and I LOVE IT when those two things mix. Hopefully it’ll live up to my expectations. You’ll see November 5th!

This one actually doesn’t have a cover or a Goodreads page yet, but I JUST got my ARC in the mail and that’s very exciting. This one is scheduled for November 12th.

Now I don’t actually have this one yet, but it does come out November 13th so Tor/Forge should be sending it to me some time before that. I have no idea when the review will go live, but it’s possible it’ll throw at least half these dates out of whack. 😛

I’m baaaack! It’s been a long absence, but at least I have something to show for it! Sorry for the strange setting. Dorm life leaves no room for privacy and my roommate was warned. Midterms will do that to a person.

The Crown of Embers by Rae Carson – Goodreads