Ten points to the correct age group who just got that title reference.

I know it’s been a while, but as it turns out I’ve been really busy! NYC may be the city that never sleeps, but that’s also a good descriptor of me trying to get the most out of my time here. As I write this, just over one of my four months here has elapsed and that is a scary, scary thought.

And yet, I’ve already done so much!

At the end of the last post, I was off to see a production of Medea, which was one of the most amazing pieces of theater I’ve ever seen. Since then, I’ve gone back to the Globe to see Comedy of Errors – SO MUCH BETTER on stage than while reading it – gone back to Edinburgh, Scotland, for a weekend and turned in my first paper of the semester. Along with a bunch of other stuff.

The thing I want to highlight in this post, though, is my trip to Hampton Court a few 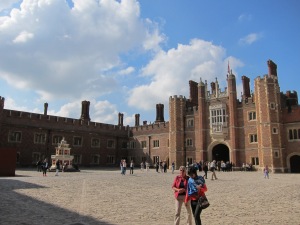 weekends ago. If you don’t know, I’m a huge Tudor history buff and Hampton Court is just about THE PLACE to go if you love Henry VIII and his crazy family.

I’ve wanted to go for years. I can’t tell you how long I’ve wanted to go. It’s a bit out of the city and tickets aren’t all that cheap, so I ended up having to beg a friend to go with me. (HI SARA I LOVE YOU.) (I’m a sucker for going places alone.)

Getting there was like entering a dream. Pictures and videos will never make you ready for the real thing. It was the absolute definition of the word “majesty.” It was just so gigantically huge that I thought it would swallow me whole and then I’d need a week to find my way back out again. I almost did.

We went ahead and got those audio guide things, which was a great decision because the overall signage in the rooms wasn’t great. There was so much information on them that I don’t know how anyone was going without. We wandered through the rooms of Georgian kings, the suites of William and Mary and then finally – saving the best for last – the rooms of Henry VIII.

It was like I’d stepped through my TV screen. Finally, finally, the crest of Anne Boleyn and 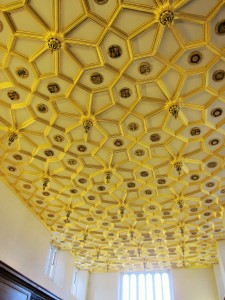 the ceiling dedicated to Jane Seymour and the gallery where the ghost of Katherine Howard is said to walk. All in front of me.

I don’t want to gush over long about all this, but I guess my point is that there are dreams that eventually do come true. What sounded crazier than saying “I want to visit this random palace in England” just a few years ago? And now I’ve done it. I’ve wandered the Hampton Court maze and traipsed through Henry’s great hall and now I own a mug with Henry and his wives on it, where the wives disappear when you fill it with hot water.

I did it. That dream came true. And it feels like I can do anything next.