I have considered that that title sounds rather ominous. It does. Oh well. Soldier on and I

don’t think you’ll regret it! (Unless you have issues with either the destruction visited on Native Americans by white settlers or non-Nazi Germans. Those topics are about to independently come up here.)

about an essay by William Cronon called “A Place for Stories: Nature, History, and Narrative.” Now, though I’ve found all of the readings so far interesting, I dare say this is one of the ones that I’ve enjoyed the most. Maybe because I understood it. Maybe because it got me thinking. Or both. Both is good.

This long essay is about narrative, why humans use narrative to structure their lives, and how each narrative is really just a choice on what to include and what to exclude (since telling a complete story is impossible)–just to brush over a few topics. I want to focus on that last one–namely the exclusion–for this particular, personal blog post.

One of the issues with narrative is that, as Cronon says, “it inevitably sanctions some voices while silencing others” (1350). For his example, he uses the lives of Native Americans in most of the tales about life in the Great Plains around the time of the Dust Bowl. Such stories of pioneers and free land could only be written, of course, if they obscured “the conquest that traded one people’s freedom for another’s” (1352). One of my classmates brought up that, although we are taught about this in schools, what we are taught does not directly link the actions of the white settlers to the destruction visited on the Native Americans. In this, schools deliberately forgo narrative in order to leave these events as unconnected as possible.

The problem with these kinds of narratives is that they can create their own power, since

they draw on stories we’re already familiar with. The erasure of the Native American-white settler connection has been ingrained in our society for so long, it’s almost unnoticeable unless you choose to be consciously aware of it. Certain stories have a certain power that “not even the historian as author entirely controls them” (1352). 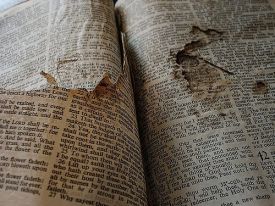 My professor asked us all at the end of class what similar narratives we told–or did not tell–in our lives that we cut or mangled in order to tell something better. You could think of embarrassing memories you want to forget, the story of the fight with your sibling where you leave out how mean you were in return–those are simple examples. For me, though, it’s the story of my grandfather’s life.

I don’t remember running into this so much before college, but the last three years … woo boy. When we talk about heritage, I state proudly that my grandparents are German–right off the boat German. They both worked really hard to achieve a dream that my family still keeps alive today in the form of a 25 acre resort and retreat. I love them both very much, though my grandfather is now dead. So I say it, and don’t think a lot about it. Almost every time I’ve said this, someone in the vicinity of me has said something to the effect of “Well, I’m Jewish.”

Usually it’s said like a joke, but I don’t find it funny. I tend to omit that my grandparents

came over right after World War II ended, but people know enough of history to guess. The funny thing is that I have nothing to hide. Yes, my grandfather navigated a bomb sweeper in the English Channel during the war. He was trying to escape to America at the war’s start when Nazi officers put a gun to his head and convinced him otherwise. My grandmother was a nurse, constantly being bombed by Allied troops. Both of them were so disgusted with the war that they left and never looked back, and when my grandfather was awarded the Iron Cross (kind of like the Purple Heart), he refused to accept it and instead left it to the German government. He spent his final years writing a handwritten novel about how Hitler screwed up Germany.

This is the first time I’ve ever put that in writing. It’s one of the few times I’ve ever said it. It is a narrative that I never tell, because I can’t start it without someone applying a better known narrative on top because they think they know what I’m going to say. German grandparents who are not Jews mean Nazis. Make another incinerator joke, I’ve heard them all. I honestly can’t tell which of us this is supposed to be more offensive to. Also, the irony is, these interactions are always happening between two people who weren’t there–these are not own our personal life stories.

I’ve gotten better at tackling these encounters, and they’ve become less frequent, but mostly because I don’t talk about it anymore. I introduce myself and leave people to infer whatever they want about my heritage. I tell other people I’m related to the captain of the Mayflower (it’s true, on my mom’s side) because that’s easier. The World War II connection is apparently calm enough to make jokes of, but not enough to completely erase the “othering” of the Germans of the time, who were all made into an enemy we needed to fight.

Now before anyone gets freaked out, I’m not saying that World War II was wrong or something or that I don’t like Jews or … whatever. I’m only saying that I have a story I can’t tell, because people assume the ending before I’ve finished the beginning. They hear my name and apply to me a narrative that is out of the control of either of us.

other and against each other in order to speak to each other” (1373-1374). Well, here’s my foray into the field. It’s not a scholarly work or a vast study of behavior. Just me, personally, telling you a story–one I refuse not to tell this time.