Michaela and I needed a book from a celebrity book club for a PopSugar Challenge, and we chose this one because it sounded SUPER COOL. It was not, in fact, what we expected. In fact, the impact of this one was seriously lackluster. Here’s why!

WHEE trying to do this without school is even harder somehow! Anyways, I actually got this video up in time. Unfortunately, it’s a bit out of focus. So sorry, but I literally didn’t have time to refilm it and that’s how the cookie crumbles. I’m about to leave for an academic conference, and ohmygosh. Anyways! This is a question for you guys as well as some thoughts, so start thinking with me!

Summer is officially HERE! The fourth season of Bibliomancy for Beginners is off to a great start! We filmed our first of six episodes last night on Bone Gap by Laura Ruby and … well. It was everything we could have hoped for and more! Taylor and I agreed! *gasp* Michaela went to the mat to defend the literary! Taylor blew my mind and then we talked about moose. Seriously. Watch it. This was a damn fine opener.

In TWO WEEKS we will be reading Invisible Fault Lines by Kristen-Paige Madonia. If you want to read along at some point this summer, please see our schedule announcement video for the list of books!

Technically, this livestream happened last night. Sorry guys! It ended up happening after my roommate went to sleep and I didn’t want to bother her anymore than I had to, so this is coming at you this morning. It happens! (This is why you should follow us on YouTube or Michaela’s Twitter. The links always go out automatically there.) Anyways, Michaela and I discussed the differing hierarchies of genres and literature and where certain kinds of genre snobbery come from. We were both so into this topic that it’ll probably spill out into my From the Notebook this Monday, at least, and probably beyond!

Look what we’ve managed! A second joint review. Unlike with Paper Towns, this one is a lot more divided – but that is why we do these things! Michaela liked it more than I did, but we both had our issues with this one. Turns out, hype is not always what it’s cracked up to be! 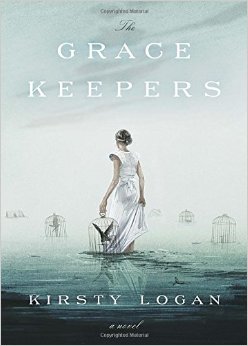 The Gracekeepers by Kirsty Logan

A lyrical and moving debut in the tradition of Angela Carter and Margaret Atwood, introducing an original and commanding new voice in fiction

As a Gracekeeper, Callanish administers shoreside burials, sending the dead to their final resting place deep in the depths of the ocean. Alone on her island, she has exiled herself to a life of tending watery graves as penance for a long-ago mistake that still haunts her. Meanwhile, North works as a circus performer with the Excalibur, a floating troupe of acrobats, clowns, dancers, and trainers who sail from one archipelago to the next, entertaining in exchange for sustenance.

In a world divided between those inhabiting the mainland (“landlockers”) and those who float on the sea (“damplings”), loneliness has become a way of life for North and Callanish, until a sudden storm offshore brings change to both their lives–offering them a new understanding of the world they live in and the consequences of the past, while restoring hope in an unexpected future.

Inspired in part by Scottish myths and fairytales, The Gracekeepers tells a modern story of an irreparably changed world: one that harbors the same isolation and sadness, but also joys and marvels of our own age.