It’s finally here! If you caught my last From the Notebook, where I talk about exactly what I was up to during our hiatus, then you’ve probably been waiting for this for a while. Over the course of the New Voices Literary Festival, I was lucky enough to be able to sit down and interview Kristen-Paige Madonia, author of Fingerprints of You and the upcoming Invisible Fault Lines (to be released May 3). Not only was she gracious enough to talk to me for a while, but she ALSO singed a copy of Fingerprints of You that I am about to give away AND gave me some great swag! Before we get to that, though, allow me to introduce the fabulous Kristen-Paige!

Kristen-Paige Madonia is the author of the young adult novels Invisible Fault Lines (Simon & Schuster Books for Young Readers, 2016) and Fingerprints of You (Simon & Schuster BFYR, 2012). Her short stories have been published in various literary magazines including FiveChapters, the New Orleans Review, the Greensboro Review, and America Fiction: Best Previously Unpublished Stories by Emerging Authors. She has received awards or fellowships from the Sewanee Writers’ Conference, the Vermont Studio Center, the Juniper Summer Writing Institute, VCCA, Hedgebrook, Millay Colony for the Arts, and the Key West Literary Seminar. She was the 2012 D.H. Lawrence Fellow and was awarded the Tennessee Williams/New Orleans Literary Festival Prize in 2010. She holds an MFA in fiction from California State University, Long Beach and currently lives in Charlottesville, Va. She is a member of the University of Nebraska low-residency MFA Writing Program faculty and also teaches creative writing at the University of Virginia, James Madison University, and WriterHouse.

The interview and giveaway are coming, but first: logistics! This interview took place verbally over the course of 15 minutes. I transcribed it into what you are about to read, editing for general speech tics and creating full sentences–that kind of thing. Initially I thought I was going to edit it into something a bit shorter but … well … Kristen-Paige said too many smart things that I agreed with not to share them all with you! It’s a great read AND there’s a giveaway at the bottom, so here we go!

END_OF_DOCUMENT_TOKEN_TO_BE_REPLACED

The hiatus is OVER! This isn’t a very bookish From the Notebook, but I am talking about where I’ve been, where I’m going … and I’m announcing an upcoming giveaway that’ll hit the blogosphere later this week. The giveaway includes a signed book and swag, and will be attached to an exclusive interview with the author, Kristen-Paige Madonia. I got to meet her last week, and she is amazing! Anyways, for more info … here’s the video!

This post is part two in a two part series about the New Voices Literary Festival. Don’t forget to check out part one!

Okay, I promise that giveaway is coming! At the end of this post. Do me a favor and don’t scroll down to the bottom just because I told you that.

So, on the second day, there were three panels. In the first one, four authors talked about writing for magazines and jobs in general. (That’s Marie-Helene Bertino, Jane Roper, Eleanor Henderson and Nathaniel Rich.) 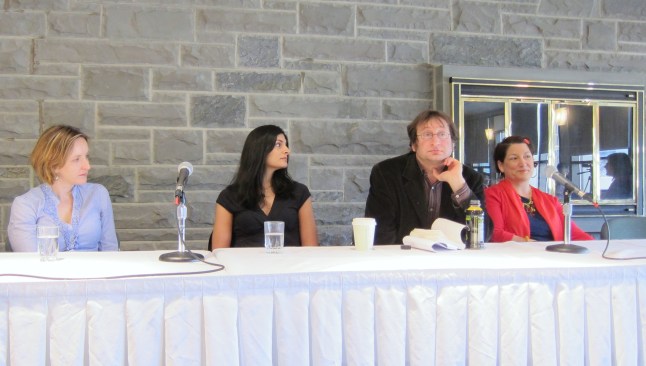 In the third, Tim Horvath, Rebecca Makkai, Robin Ekiss and Jane Roper talked about writing from research and inspiration. 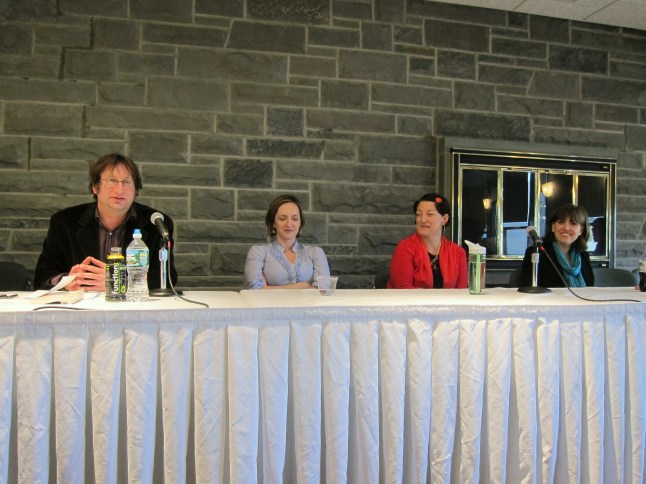 The reason I’m glossing over those talks so much is because that wasn’t where the real awesomeness was for me. I mean, sure, the

panels were really entertaining and wonderful and I could just feel my creative juices moving just from what they were saying. However, the best part for me was talking to the writers in between the panels, when they came out from behind the table and kicked up their heels on the couches. When you just start talking, the most amazing things can happen.

For example, Jane Roper and I got to talking about blogging big time. I ended up telling her about Rafflecopter, which I had never heard before, and she informed me that you can’t change your Facebook page name after you have more than 100 likes. This kind of sharing of information isn’t something that happens during a panel—it’s just organic.

I also found out that Robin Ekiss is afraid of medically needed helmets, and Rebecca Makkai is desperately creeped out by steel wool. I don’t know what I’m going to ever do with this knowledge, but the fact that I know it makes it feel precious. There’s something so fantastic about realizing again and again that people who have published their work are people just like you.

After the panels, the writers went on a trek to some waterfalls nearby. I didn’t go, but I was pleasantly surprised to know that none of the writers fell into the waterfall.

Then there was a reading by the final four authors. Shameless plug for all their wonderfulness!

After the reading, there was a mass rush to get everyone to sign everything. I now own an autographed copy of Skunk Girl, and my roommate bought Odds Against Tomorrow and The Borrower. I will be stealing those. There was a wonderfully amusing moment where Professor Holmes gave Jane Roper a book to sign, which he had bought used and already had her signature inside it.

Ann, whoever you are, Jane Roper has learned you sold the book she autographed for you and has put a big X through the words she wrote to you.

After the reading, there was a wonderful little barbeque where we all swapped some last stories before saying goodbye. Not only did I make wonderful friends during this opportunity with authors, I also made them with fellow students!

Recently, I’ve been so down on my own writing, but this event has just inspired me to keep going. They shared their creative drives and now I can’t stop typing this blog post is going to get so long oh gosh.

BUT! I PROMISED A GIVEAWAY!

Sheba Karim was my author, and also the young adult author of the panel. For one lucky US citizen, I have a SIGNED copy of her debut album Skunk Girl! Enter below if you want in!

GET READY! In this series of posts there are amazing authors, amazing stories, and an amazing giveaway. IT’S SO EXCITING!

College, they say, is a great time to try out some new opportunities. This proved to be quite true over the past three days, when I was a

Conceptualized by Professor Chris Holmes from the English Department and Professor Eleanor Henderson from the Writing Department, these two fantastic people brought together eight emerging writers to talk to students over the course of three days. (List of these authors later, don’t worry.)

Professor Holmes was the one who alerted me to the Student Guide applications. The idea was to have sixteen student guides, two from each year and two for each author, to act as the author’s guide around campus. The job came with perks such as backstage access and non-dining hall food. I applied like a rocket, received the honor, and was assigned to author Sheba Karim. I proceeded to skip 95% of my classes over Thursday and Friday to hang out with these eight wonderful people and leech their knowledge for my own. I wasn’t disappointed.

Sadly, I did miss the first event of the festival, on Wednesday, in which the eight authors all read short bits of their work at a bookstore in town. However, I was there bright and early the next morning to have breakfast with the authors before their first events of the day.

At 10:50 AM on Thursday, instead of going to my honors seminar class, I walked Sheba Karim and fellow New Voices author Marie-Helene Bertino to a class taught by Professor Henderson and sat on a cabinet for the duration. It was a great experience to see not only Sheba and Marie-Helene speak, but also to sit in on a class that I will be taking in my junior year. (See, the trick during these things is to suck them dry for everything they’re worth.)

At 12 PM, all eight writers attended a panel about being a college reader and writer. Since now would be a greatly un-invasive time to name them, the writers in the New Voices Festival, in the order they appear in this picture, are Sheba Karim, Marie-Helene Bertino, Eleanor Henderson, Jane Roper, Rebecca Makkai, Robin Ekiss, Nathaniel Rich and Tim Horvath.

After that, we all moseyed to the library to the Center of Faculty Excellence, where there was a small reception and a music student preformed music that he had written based on three poems by Robin Ekiss. This was followed by a reading at the Handwerker Art Gallery, where four of the eight writers read, and I introduced Sheba Karim. Since it’s Sheba’s book I’m giving away, and I spent so much work on this intro, I’m going to insert what I said here:

They say that to be a writer its best if you’re good at a few different things. Sheba Karim is certainly that. Her novel, Skunk Girl, is 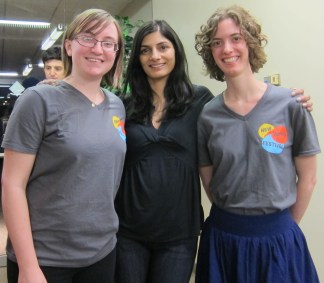 young adult fiction, and she is also the editor of a collection of erotic short stories. Her literary fiction has appeared in 580 Split, Asia Literary Review, Barn Owl Review, EGO, Kartika Review, Shenandoah, South Asian Review, Time Out Delhi and in several published and forthcoming anthologies in the United States and India, including Cornered, Electric Feather and Venus Fly Trap. Her current project is a historical fiction novel set in 13th century India. All this showcases two different things: Sheba Karim gets really grumpy when she isn’t writing, so she writes a lot, and that the drive to show your parents that writing is a viable career option will actually get you far.

When not writing, Sheba Karim likes to dance, sometimes with an ironing board, get kicked out of nightclubs in Bombay and ending up as a 6 AM extra on the set of a Bollywood movie—all at once. She is obsessive about planning trips, so much that she believes she was a travel agent in a past life. Someday, she would love to go diving. No mention if this is to be done with an ironing board, though. Oh, and in case anyone who has ever taken a Catherine Taylor writing class is curious, her spirit animal is a chocolate eating cat. Please welcome Sheba Karim.

After everyone was wowed by my public speaking skills (you know, the nonexistent ones), the day was ended. Please wait as I shamelessly plug the four authors who read that night:

WANT MORE DEETS? What happened the next day? What did I teach Jane Roper? What happens when Jane Roper is given a book that was already signed? How many writers did we lose in the gorges? What are Robin Ekiss and Rebecca Makkai’s greatest fears?

Check back in tomorrow and see!