In the Faerie realm, Noli Braddock’s relationship with her best friend V has grown into something more. But V’s mother, Faerie Queen Tiana, has ruled that they are forbidden to see each other. Returning to the mortal realm, Noli joins the crew of her brother’s air-pirate ship, the Vixen’s Revenge. There she discovers that her brother has hired the scallywag Faerie huntsman, Kevighn Silver. While serving as shipmates, Kevighn and Noli learn that the Earth Court King plans to find a forbidden artifact–one that will bring destruction to everyone Noli loves.

Thanks to NetGalley and Flux for this eARC! This title will be released on August 8th, 2013.

WARNING: This review WILL have spoiler for the first book! Read my review of Innocent Darkness HERE!

I’ll be the first person to admit that I wasn’t entirely thrilled by the first installment of this series, but I was interested enough to request the second book. Sadly, as many “middle” novels have been showing me these days, I sometimes think that some series should not be trilogies. Or people at least need some new conventions for middles of series.

END_OF_DOCUMENT_TOKEN_TO_BE_REPLACED 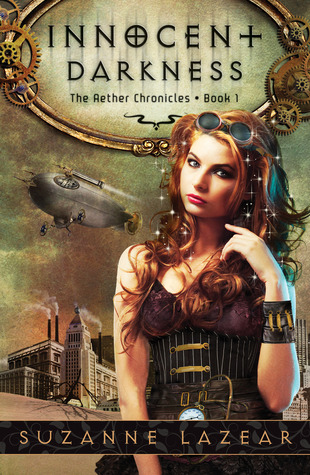 Wish. Love. Desire. Live.
Sixteen-year-old Noli Braddock’s hoyden ways land her in an abusive reform school far from home. On mid-summer’s eve she wishes to be anyplace but that dreadful school. A mysterious man from the Realm of Faerie rescues her and brings her to the Otherworld, only to reveal that she must be sacrificed, otherwise, the entire Otherworld civilization will perish.

This review is of an ARC received from NetGalley. You can get a copy for yourself August 8th, 2012.

Despite having awesome amazing steampunk trappings at the beginning, fans of straight steampunk might find themselves a little upset with this book. Since I personally didn’t request this book just because of the steampunk factor and I enjoy reading about fairies this didn’t bother me, but I can only imagine steampunk fans not being warned of this. So, yeah, you’ve been warned.

Noli is my kind of girl. She makes fun of simpering, vain girls and prefers fixing machines and hoverboarding. The time she spends at the abusive boarding school is written fantastically, and it sent chills up my spine while making me ill. (Not graphic anything, mind you. Just the idea that they would do these things to these girls.) That entire first section is the entire reason this gets three stars. It made me excited for what was to come and allowed me to fall in love with Noli.

Unfortunately, the second half of the book wasn’t as great.

To be fair, I loved the setting. I loved the plot. I loved the description and the little wood fairies. But the characters began to grind against me. Noli, for example, begins to lose her independence a little bit. She spends a lot of the second half crying and running away. Granted, freaking everybody DID lie to her and she does do some spectacular slapping-of-faces, but she spends so much time crying and simpering and it really began to grate on my nerves.

The “mysterious man” from the blurb is a Fae named Kevighn. He’s the queen’s huntsman, tasked with finding a girl full of “Spark” to sacrifice so the Otherworld, magic and the Fae can continue to exist. He does this by seduction, usually. However, Noli is just different from the other girls and he finds himself falling in love with her. Because she … gardens? Never once did she do much of anything except frustrating him by not giving into his charms or binding to the Otherworld. His character was bland, seemingly unnecessary, and made way too many mentions of how much he wanted soft women and opium. So why was he there?

Thankfully, at least Noli’s best friend from forever, Stephen “V” Darrow, is the other half of the triangle. Despite being a little over swoony, he’s actually a realistic kind of guy. Noli’s reasons for liking Kevignh are flimsy at best, but at least with V the attraction makes sense. They are clearly in love with each other right from the get-go, so they also lacked insta-love which I enjoyed. (Well, until it got awkward there towards the end and I was wondering if I was going to need to warn people under 16 about this book. That was … spontaneous.)

It is the plot that saves this second half. After all, I still like Noli enough that I don’t want her to DIE. V showing up gets her away from Kevighn (at least, until he randomly shows up, twice), which makes a lot of things more bearable. V’s brother James and Noli’s friend Charlotte are also fun characters, and I enjoyed reading about them.

The first part of the end seemed like a deus ex machina. This huge issue seemed to be resolved too easily. What I didn’t realize what that the book was NOT over yet. What happens to Noli at the end was definitely a twist that I wasn’t expecting, and it left me interested in what would happen next.

Overall, the book was a solid 3 stars. I even thought about giving it 3 1/2. I recommend this book for people looking to ease into steampunk, as long as you are the kind of reader that likes romance-centric novels with love triangles. If you’re looking for straight steampunk or something with a little less romance (the latter of which I was hoping for) then this might not be a top choice for you. Still, I enjoyed the world and I look forward to the next installment!

The second book in The Aether Chronicles is currently untitled, with an expected release year of 2013.