So, you guys might remember that right before my break, Michaela and I made a Spring Break TBR. I honestly, totally believed that I was going to get that reading done while I was on my road trip. I didn’t. (Well, not mostly. You already know this if you’ve seen the most recent weekly wrap up.) This video is all about how that happened, and how it caused a revelation to me about my reading and why I should stop beating myself up about my inability to read my unread books.

Posts mentioned in the video that aren’t already linked above:

I’M BACK! Okay, yes, I’ve been back for a few days but now I’m back IN THE VIDEOS. My blog might not have been nearly as impressive as Michaela’s this week–like, by a long shot–but I’m strong in the end of the week AND we finally taped our Imbibliomancy video! Even better, Michaela and I did a lot of reading and there is a great selection of interesting books for us to share with you!

Hey there guys! Today’s review is going to be a little bit different. I’m going to be doing quick reviews of the three books in the Blooming Goddess trilogy by Tellulah Darling, followed by a series overview. This series is a Hades and Persephone retelling with a twist and lots and lots and lots of swooning and sassing. This will all be spoiler free, even in the later reviews! 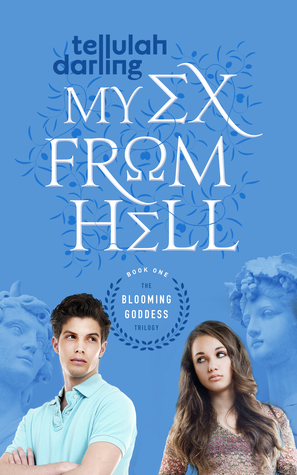 Romeo and Juliet had it easy.

Prior to the Halloween dance, Sophie figures her worst problems involve adolescent theatrics, bitchy teen yoga girls, and being on probation at her boarding school for mouthy behaviour. Then she meets bad boy Kai and gets the kiss that rocks her world.

This breath stealing lip lock reawakens Sophie’s true identity: Persephone, Goddess of Spring. She’s key to saving humanity in the war between the Underworld and Olympus, target numero uno of Hades and Zeus, and totally screwed. All she’s gotta do is master her powers, save the world…

…and stop kissing Kai, Prince of the Underworld.

My Ex From Hell is a YA romantic comedy, Greek mythology smackdown, perfect for everyone who loves sassy girls that kick butt and the bad boys who infuriate them.

I wrote a longer review of this book (linked above) when I participated in the blog tour for it’s initial release. Honestly, I’m not sure if I would have picked it up otherwise. It sounded a little corny to me–and I love me a sassy YA heroine.

It was pure joy to read. My original rating was 3 1/2 stars, and I totally stick to that. These aren’t the best books, writing wise, that I’ve ever read. I’ll be totally honest about that. However, in terms of shear reading enjoyment? They’re one of the best. The main character, Sophie, is the quintessential sassy main character on steroids, and there is no one getting in her way. The book reads hyper fast, with plenty of action, humor and romance to go around.