It’s finally here! I’ve been discussing this book since I released my reaction to it as my first audiobook, but the review was not live until TODAY. So, here it is. Michaela and I both listened to the audiobook, and had an opposite reaction that led to a similar rating … somehow. I liked it more than I thought I would, and Michaela liked it less, but we still both rated it about a 3.5. Find out why!

LOOKIE HERE! I’m back with an actual review today, in video form. This includes a shout out to the lovely MercuryCalling booktube channel for convincing me to buy this book in the first place. I wasn’t disappointed! Though I had my issues with it, I’m really excited for Alwyn Hamilton as a writer and the rest of this series!

And I Darken (The Conquerers Saga #1) by Kiersten White

NO ONE EXPECTS A PRINCESS TO BE BRUTAL.

And Lada Dragwlya likes it that way. Ever since she and her gentle younger brother, Radu, were wrenched from their homeland of Wallachia and abandoned by their father to be raised in the Ottoman courts, Lada has known that being ruthless is the key to survival. She and Radu are doomed to act as pawns in a vicious game, an unseen sword hovering over their every move. For the lineage that makes them special also makes them targets.

Lada despises the Ottomans and bides her time, planning her vengeance for the day when she can return to Wallachia and claim her birthright. Radu longs only for a place where he feels safe. And when they meet Mehmed, the defiant and lonely son of the sultan, who’s expected to rule a nation, Radu feels that he’s made a true friend—and Lada wonders if she’s finally found someone worthy of her passion.

But Mehmed is heir to the very empire that Lada has sworn to fight against—and that Radu now considers home. Together, Lada, Radu, and Mehmed form a toxic triangle that strains the bonds of love and loyalty to the breaking point.

Thanks to NetGalley and Delacorte Press for the eARC! This title will be released June 28th, 2016

As someone who has read almost every Kiersten White book in existence, I still don’t know what to make of this one. It opens up with a disclaimer that this is like no other Kiersten White book you’ve ever read, and that’s fair. But it’s for all these good AND bad reasons that are jumbled in my head and have left me mightily confused.

END_OF_DOCUMENT_TOKEN_TO_BE_REPLACED

It has finally arrived. When I reviewed The Orphan Queen (the first book in this duology), I said that my final feelings on TOQ would depend on how some things were resolved in TMK. Well, they’ve been resolved, but not in the way I wanted. Also, I really need your guys’ help talking about TOQ novellas and how important they were to actually read!

I guess I can’t put off this review any longer. The Rose and The Dagger by Renee Ahdieh is the sequel to The Wrath and The Dawn, which was easily one of my favorite books of 2015. Right now, though, The Rose and the Dagger is probably one of my disappointing books of 2016. Given how much I wanted to love this, I can’t believe I’m saying that. But. Here’s why:

The Falconer (Falconer #1) by Elizabeth May

Heiress. Debutant. Murderer. A new generation of heroines has arrived.

Lady Aileana Kameron, the only daughter of the Marquess of Douglas, was destined for a life carefully planned around Edinburgh’s social events – right up until a faery killed her mother.

Now it’s the 1844 winter season and Aileana slaughters faeries in secret, in between the endless round of parties, tea and balls. Armed with modified percussion pistols and explosives, she sheds her aristocratic facade every night to go hunting. She’s determined to track down the faery who murdered her mother, and to destroy any who prey on humans in the city’s many dark alleyways.

But the balance between high society and her private war is a delicate one, and as the fae infiltrate the ballroom and Aileana’s father returns home, she has decisions to make. How much is she willing to lose – and just how far will Aileana go for revenge?

Three and a half stars

A long, long time ago (okay, back in 2014), Bibliomancy for Beginners did a hangout on Elizabeth May’s The Falconer. To say that Michaela–and especially Taylor–didn’t like it would be an understatement. I remember enjoying it, even if I didn’t love-love it. But, once the camera started going and we all started chatting, something about what I had loved got lost. Don’t get me wrong, that’s a HILARIOUS hangout and you should totally watch it. But almost two years later I have realized something important: I don’t think I was fair.

END_OF_DOCUMENT_TOKEN_TO_BE_REPLACED 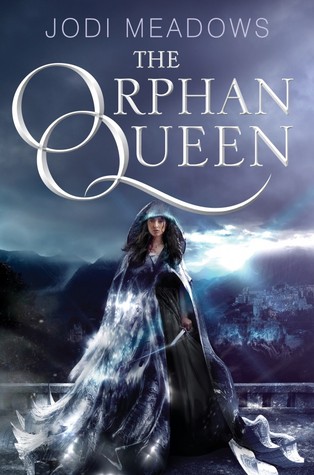 Wilhelmina has a hundred identities.

She is a princess. When the Indigo Kingdom conquered her homeland, Wilhelmina and other orphaned children of nobility were taken to Skyvale, the Indigo Kingdom’s capital. Ten years later, they are the Ospreys, experts at stealth and theft. With them, Wilhelmina means to take back her throne.

She is a spy. Wil and her best friend, Melanie, infiltrate Skyvale Palace to study their foes. They assume the identities of nobles from a wraith-fallen kingdom, but enemies fill the palace, and Melanie’s behavior grows suspicious. With Osprey missions becoming increasingly dangerous and their leader more unstable, Wil can’t trust anyone.

She is a threat. Wraith is the toxic by-product of magic, and for a century using magic has been forbidden. Still the wraith pours across the continent, reshaping the land and animals into fresh horrors. Soon it will reach the Indigo Kingdom. Wilhelmina’s magic might be the key to stopping the wraith, but if the vigilante Black Knife discovers Wil’s magic, she will vanish like all the others.

Jodi Meadows introduces a vivid new fantasy full of intrigue, romance, dangerous magic, and one girl’s battle to reclaim her place in the world.

Three and a half stars

I’m not sure I’ve ever been this conflicted about a rating before. For sure, this rating would not go any lower. However, the conflict comes from whether or not is should be higher. I’m not sure. Let me explain.

END_OF_DOCUMENT_TOKEN_TO_BE_REPLACED

Hey everyone, and welcome to the blog tour for Daughter of Isis by Kelsey Ketch, hosted by YA Bound Book Tours. You might remember that a little while ago I helped reveal the cover of this book, and after that I just couldn’t NOT be a part of this tour! As always, I’m only one stop, so remember to check out the rest of the tour! Now, onto the real business!

END_OF_DOCUMENT_TOKEN_TO_BE_REPLACED

When Marilla and Matthew Cuthbert of Green Gables send for a boy orphan to help them out at their farm, they mistakenly get Anne Shirley, a feisty, independent, but warm-hearted eleven-year-old girl. Fortunately, her sunny nature and quirky imagination win the hearts of her reluctant foster parents and everyone in the community. But not a day goes by without some memorable adventure or prank in the tragicomedy of her life.

Yes, this is a re-read. But I sat there and read the whole thing and I don’t have anything else finished for today so HERE WE GO! Besides, I think it’s quite interesting to compare reading this now to how it was when I read it as a child.