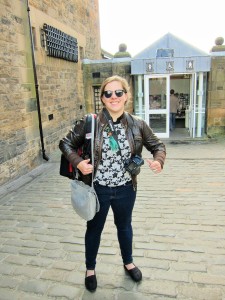 Honestly, I think me and my friends have been pretty good about not being THAT American. You know, those people wearing American flag pants or backpacks talking loudly on the tube. Actually, we’ve done really well at not being THAT tourist, wandering around wearing I LOVE LONDON sweaters or something.

Sometimes, though, you just have to cave in. You have to do THAT TOURIST THING because at the end of the day, we are overseas for four months and we are tourists. That’s just it.

In my attempt to be all chill about living in London, it 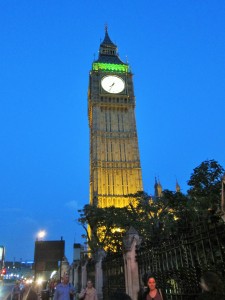 actually took me a month to see Big Ben. I KNOW, right? Silly me. But honestly it’s just a clock, guys. And not as big as I thought.

Another touristy moment of mine was heading out to Kew Gardens. These Royal Botanical Gardens are one of the most amazing things I’ve ever seen – and SO BIG. In just one greenhouse, they showcase every kind of environment from deserts to rain forests that plants can be found in. And then there are rolling lawns for days. I call this a touristy moment because the second I walked in there, I lost my mind. I didn’t realize I’d been missing green so much, because I just started dancing and running around and generally being laughed at by everyone I was there with. Absolutely no shame. 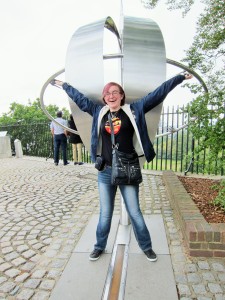 Greenwich. We climbed the hill and paid the money to go stand in two hemispheres at once and take the requisite picture. In a way, what was cooler was that the museum that they have there had been taken over by steampunk artists, so the history was littered with steampunk garb and art by a bunch of different people. Completely worth it!

I also feel compelled to add in here the trip I just came back from, which was an overnight ostensibly to Stratford-Upon-Avon. On our way there, we stopped at Warwick Castle, which is a gorgeous bit of architecture that entertains you all day long with activities presented by people who really seem to love their job. We saw a trebuchet launch, a bird’s of prey show and an archery demonstration. Total tourist trap, but totally worth it.

While in Stratford itself, we saw a Royal Shakespeare Company production of Love’s

Labour’s Lost, which was simply fantastic. The set alone was a marvel to behold. I still don’t like reading Shakespeare, but watching it performed has grown on me a great deal. We also wandered our way out to Shakespeare’s grave, of course, and paid to stare at that. Again, total tourist thing you just HAVE to do if you’re out there. Why not, right?

On the way back, we stopped in Oxford and basically just wandered around. We were all a bit tired by that point. Still, we went and stared at the church where they filmed the Great Hall scenes in Harry Potter and wandered around the college streets.

I’m sure there will be many more moments when I have to suck it up and strap my camera to my belt, map in hand, and I’m not going to regret them. We’re abroad to do those things that you do in a foreign country. Tourist traps are one of them. You just absolutely have to do some of these things. Otherwise, it’s just an opportunity missed that might not ever come around again. No shame from me!