Hey all! I am finally back from Pennsylvania, and I CANNOT WAIT to tell you all about my last couple of days. For those of you who missed my post about the writing workshop I was just attending, it’s HERE. If you bear with this post, you will find live tweeted writing advice, a video of Tamora Pierce reading for Battle Magic AND a giveaway of a signed book!

In recap, for the past almost two weeks I spent days being lectured to by three amazing authors and one fantastic editor: Kij Johnson, Tamora Pierce, Catherynne Valente and John Joseph Adams. I also spent time writing and hanging out with 19 other fantastic writers in training, all between the ages of 14 and 20. It is like all the awesome in the world, packed into one.

Our first lecturer was Tamora Pierce, who is like the Alpha Writer-in-Residence. She is there every year, though the three other spots rotate. This year, she chose to live with us in the dorm and hang out the WHOLE TIME. I nearly died of happiness. Tammy was one author with whom I managed to get in some live tweeting, so here are all those tweets for those who missed it:

This was hardly all the live tweeting I did for her or just Alphaness and general, and if you want to check out the rest find the hashtag #alpha2012.

Tammy was fantastic, both in her lectures and in hanging out in general. At a Barnes and Noble reading, she also read from her yet-to-be-released book Battle Magic. Because I’m the best, I got a video of this for you guys. ^.^ Check out my youtube channel for more!

Kij Johnson was the second author guest we had. She was also the last person I got a large amount of live tweeting in on. Let’s just get that out of the way…

Like the other author guests, Kij was absolutely amazing. Her lecture about the levels a story should have with themes, motifs and symbols really 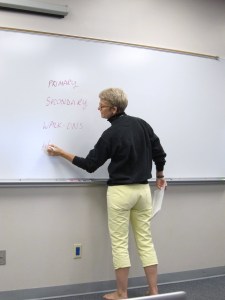 got me thinking about my own writing. In some ways it was really hard to hear, but in others I think it was good to know that I have things I need to work on. We also got to hear Kij read her short stories Ponies and 27 Monkeys. She also signed my copy of her novel, Fudoki!

Cat Valente also lectured with serious levels of awesome. Her first lecture took place after some craziness: she had just flown in from Budapest! Talk about some serious jet lag, but she soldiered through it. During her second lecture, I was actually prevented from live tweeting because I was taking SPEED NOTES. She had this animated power point like thing that took us through all the levels of structure in a story and, well… I ran out of ways to bullet my notes trying to keep up with her diagram. She also read from her novel Deathless and signed my copy of The Girl Who Circumnavigated Fairyland in a Ship of Her Own Making!

John Joseph Adams was our last guest. This was a really awesome 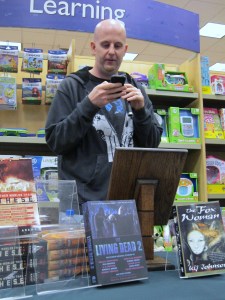 contrast, because JJA isn’t a writer, but an editor! He’s been called “The King of Anthologies” and also edits the online scifi/fantasy magazine “Lightspeed.” After a lot of lectures about the actual craft of writing, hearing about the world of writing and publishing–especially since the goal of Alpha is to submit something at the end!–was a great new topic and just as helpful. He also read a story, one not of his writing, from his latest anthology.

After all this time at the University of Pittsburgh at Greensburg campus, our merry band of writers moved on to a Doubletree hotel in Pittsburgh for a literary scifi/fantasy convention called Confluence. Though I did not actually attend many panels in lieu of spending time with all my new friends, the entire workshop did get its own hour Q&A with the Confluence guest of honor, Seanan McGuire (some of you may know her as author Mira Grant). Though I didn’t get any pictures or live tweet this, it was absolutely fantastic. Seanan is a GREAT person who is really funny and amazing to talk to. She also signed my copy of her novel Discount Armageddon!

My time at Alpha was amazing. Words cannot adequately describe it, and its entire purpose was to teach me to be a better writer. The friends I made there are awesome, and the things I learned I’ll keep forever. If YOU are a young writer in between the ages of 14-19, I BEG you to apply there next year. The deadline is March 1st.

Out of all this, I did manage to snag you guys something! A SIGNED copy of The Girl Who Circumnavigated Fairyland in a Ship of Her Own Making by Cathrynne Valente! Don’t miss out! Click HERE to enter! Giveaway is US only.