Okay, nobody panic. This feature sounds kind of pretentious and crotchety, but it isn’t. In fact, this feature (which may not always be weekly) will be a combination of book reviews, tirades against academia, writerly panic and frustration, rants about book tropes and fan girl freak-outs–usually about Sarah J. Maas, probably. Let me explain.

I’m a senior this year. *INSERT PANIC HERE* I have chosen to inflict upon myself the year long English Honors Thesis course that my Department offers here. Now here you might expect me to say that I’m studying Shakespeare or some post modern writer or something.

Well, you might. But you’ve been following me on this blog and you know that that isn’t my style.

First things first, remember that post I wrote about being an English and Writing double major? While I’m writing this English Thesis, I’m also completing my Writing Senior Project, which is a novel. This will come into play later.

The topic of my English Honors Thesis, broadly, is YA publishing trends and female assassins. It’s conception came from me saying HOW CAN I JUST KEEP REREADING THRONE OF GLASS FOR CREDIT? Turns out, my thesis adviser really likes what I came up with. I’m not going to bore you with the academic details, I’m just going to say that I’m going to be writing about the tropes of these books and therefore reading a bunch of books like Throne of Glass to make my point. Which is where the rants about annoying tropes and the book reviews come in. I’ve actually got a short list on Goodreads about what books I’m considering.

The YA publishing trends component of this is going to mean that there are some books on there that don’t make sense, but don’t fret. I’ll explain that all in due course whenever I figure out what the hell I’m doing.

Don’t forget that novel I’m writing! It occurred to me, rather late in the game, that if I was

doing all this work talking about tropes of female assassins and what they do well and what they don’t that maybe I should WRITE the book that destroys all the tropes I hate and is actually more like what I want to read. So far I’m two chapters in and while I’m way rusty (more on this later), I’m making myself laugh so that’s about the best I can expect.

Still with me? If not, that’s cool. I honestly don’t know if anything remotely interesting will come out of this besides amusing rants and more book reviews, but that’s okay. At least it’ll help me sort out my thoughts.

Tune in next week when I discuss Poison by Bridget Zinn, why I can’t tell if I like it or not and why I’m confusing myself as to whether or not to consider it for my thesis! I know that I don’t blog as much as I ought to anymore, but hey. That’s life. However, if you’ve been watching our Bibliomancer videos (or just seen Michaela’s great thumbnails for recent episodes) then you know that I missed on regularly scheduled episode on Jorge Luis Borges’ Collected Fictions AND the first of our ten part Nostalgia Junkie special with the Pendragon books. I promised in each of those posts that I would get around to tell you all where I’ve been.

That promised time is now.

I’m going to diverge for a second, though, and give some context for what’s about to follow. As you may or may not know, I am an English and Writing double major at Ithaca College–about to be a senior. This means I have two more semesters before I get spit out into the big, wide world. I always maintained that what I wanted was to be a teacher. Always.

And it had started to seem like a problem.

END_OF_DOCUMENT_TOKEN_TO_BE_REPLACED 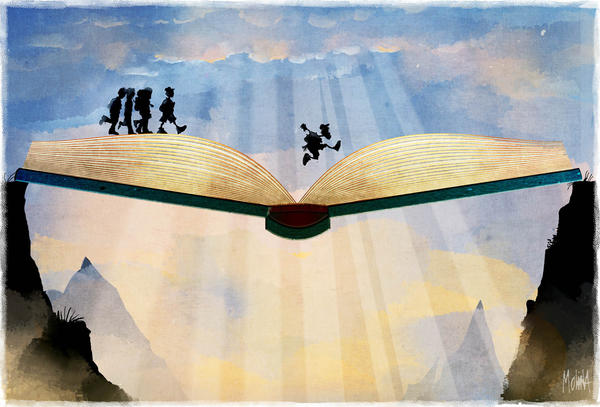