Hey guys! Technically I got back in on Tuesday, but I spent all of Wednesday trying to get back into school and readjust to this time zone. I have accomplished neither of these things so far, but I’m swimming. 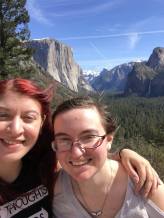 Since I don’t have anything for a Thesis Thursday this week, I thought I’d do some life blogging and show you guys some pictures of where I went. This was not a normal trip out west. Rachel and I–you know, Rachel from the first couple seasons of Bibliomancy for Beginners–went on a road trip.

I have never had so much fun and whil
e having so many moments convinced I was going to die.

This day was a beautiful one. Once we got out of the city, we got onto the Pacific Coast

Highway and took that up to San Fran. This is NOT the way that your GPS will ever tell you to go. It winds around the edge of the coast–literally, the edge–but it is SO PRETTY. So pretty.

San Francisco itself was kind of annoying, and the place that we were staying wasn’t so great. But we went out that night and found the most delicious Thai food I ever tasted, and Rachel and I decided that things could only go up from there! We were wrong. 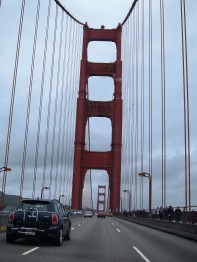 achel and I woke up bright eyed and bushy tailed, but that quickly changed. While we slept, someone broke into our car–shattering the back passenger window. Rachel lost some stuff, but nothing that wasn’t replaceable. Except, you know, that window. She got to call the police while I filed the insurance claim and then it took us forever to find someone to fix the window that day because it was the weekend. When we finally did, we spent the hour we waited for the window debating whether or not to give in, turn around and go home. We were both really shook up. HOWEVER, we chose to carry on!

Once again, we took the Pacific Coast Highway. Or, well, we tried. We made it almost all

This was before we lost all signs of civilization. Pun intended.

the way to Crescent City, and then the highway was closed. We were sent on this detour, on a road with no guardrails, no shoulders, no lines on the road–no nothing. Our phones lost signal and we just kept creeping around turns that were smaller than 90 degrees, hoping we didn’t die. Eventually we came out the side, but honestly I think I had about seventy million panic attacks that day.

An astute person might be able to deduce that I skipped a state, here. That’s right: on day 3 we drove right on through Oregon. Well, almost right on through. While we were driving (on a highway, I might add. I love highways. I wanted to kiss the pavement. It was very straight), I just happened to look up a few of the Oregon wineries that my dad stocks in our wine cellar. Turned out that we were going right by Willamette Valley Vineyards. We decided to stop by, because we could.

Turns out, they were having this huge “Wine, Pear and Cheese Jubilee” event to celebrate 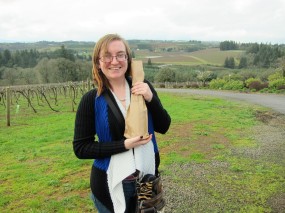 the recent release of a bunch of their wines. We got to do a tasting that included 8 wines, 4 of which had been released that day and were only available to buy from the winery that day. Each one was paired with gourmet cheese. Okay, 7 were with cheese and one was with pears. I ended up sending some wine to my parents and making off with a bottle of rose that had just been released the previous day. I still have that bottle.

After that, we popped by Portland for lunch, since Rachel is from Maine and this was a very important comparison to make. Then we managed to survive the traffic through Tacoma and get to our hotel outside of Seattle!

We were so confused by a day without driving for like 10 hours. IT WAS GREAT. Our first stop was to make a pilgrimage to the holiest site at that which Rachel worships: the Starbucks Reserve Roastery. We spent a wad of cash on the fanciest, most amazing coffee I’ve ever tasted and stared unabashedly at the pretty, pretty copper roasting machines happening all around us. I don’t even LIKE coffee all that much, and it was amazing.

From there, we went to the EMP Museum, which is exactly what anyone might imagine

She was just about crying when this picture was taken.

would spring up if you mashed me and Rachel’s interests together. Rachel is an audio production major here at Ithaca, and EMP’s big focus is music and music recording. There were exhibits on Nirvana, Jimi Hendrix, and a bunch of recording rooms for drums, guitars, keyboards and vocals as well as mixing boards that you could play with. 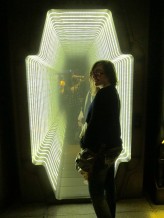 For me, there were three separate exhibits on fantasy, horror and science fiction. All of our favorite show were represent; Star Trek, Star Wars, Alien, Doctor Who, Lord of the Rings, Harry Potter, The Princess Bride, Game of Thrones–you name it, they had it. You could also play around on the “bridge” and become a part of their fan created exhibit by stepping into a scream booth and put yourself on a tarot card to figure out your inner fantasy figure. SO MUCH GEEKING OUT.

Our first stop on our second day of NO DRIVING was the Pike Place Market, which is this cute outdoor market filled with all kinds of shops. We ate lunch there, with the most delicious seafood entree. I’m probably never going to be able to eat fish again. For at least a week.

After that, we went to the Chihuly Glass Museum and Garden. I am a gigantic lover of all art that has to do with glass and light, so this place was just about my heaven. Every time we stepped into a new room, I gasped. There was everything from these tiny glass balls to giant chandeliers and a whole ceiling installation. There were pieces inside, but also the gardens were created so that everything fit together perfectly. The flowers were color matched, for goddess sake. God, it was amazing.

After that, we had some time to kill, so we started wandering around Seattle. We went by the Olympic Sculpture Park, and climbed around on the rocks by the ocean. It was so … relaxing. We really needed that.

Right as the sun was beginning to set, we popped up 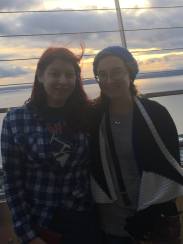 onto the Space Needle! We didn’t stay long because it was super chilly, but it was still really cool. I like being in high places.

No pit stops today! Not much of anything, actually. Yreka, however, was a wonderful place. It’s this cute little mining town, and the waiter at the place we ate had a waxed mustache. It was perfect, and a nice way to start our craziness of the road trip again.

Right after we left Yreka, we stopped in by Mt. Shasta really quickly. We’d actually been able to see this mountain since we’d approached Yreka yesterday, and it was really impressive. It was really important to me to stop by so I could send some pictures and pick some stuff up for my mom, and Rachel indulged me. We had a lot of fun driving as far as we could up the mountain and messing around in snowbanks that were higher than our car while still being in t-shirts!

After that, we booked it to Groveland, where we camped in 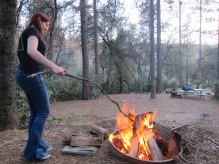 the car for a night. Groveland is right outside of Yosemite, which was our plan for the next day. We ate dinner at what is apparently the oldest standing saloon in America, and then bought s’mores supplies and had a campfire. I hadn’t gone camping since, well, the last time I was in Yosemite like five years ago, so it was a lot of fun!

You could say that we took the long way to LA, by which I mean that we drove as much as we could through Yosemite before we jetted back down to Rachel’s apartment. Words can’t even describe how gorgeous Yosemite is, guys. We were stopping the car every few seconds to jump out and get pictures. Each one of them could be a postcard. Like I said, I’d camped up in Tioga Pass a few years ago (which is closed in the winter), but this felt like a whole new view of the park. SO. PRETTY.

LA, where we laughed about not having to drive anywhere. I got a ridiculous sunburn. It was FABULOUS.

And now I’m back in Ithaca, where it is really cold and I look like a tomato.

I know this wasn’t very bookish, but I plan to do a From the Notebook video on Monday talking about what weirdly happened to my reading habits during this trip. As you may have seen, I did a Spring Break TBR right before I left and … well. You’ll see!