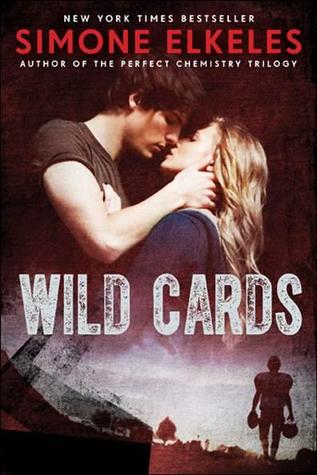 After getting kicked out of boarding school, bad boy Derek Fitzpatrick has no choice but to live with his ditzy stepmother while his military dad is deployed. Things quickly go from bad to worse when he finds out she plans to move them back to her childhood home in Illinois. Derek’s counting the days before he can be on his own, and the last thing he needs is to get involved with someone else’s family drama.

Ashtyn Parker knows one thing for certain–people you care about leave without a backward glance. A football scholarship would finally give her the chance to leave. So she pours everything into winning a state championship, until her boyfriend and star quarterback betrays them all by joining their rival team. Ashtyn needs a new game plan, but it requires trusting Derek—someone she barely knows, someone born to break the rules. Is she willing to put her heart on the line to try and win it all?

Thanks to Walkers Books for Young Readers and NetGalley for this eARC! This title will be released on October 1st, 2013.

I have a soft spot for Simone Elkeles’ books. When I saw she was writing a new series, I jumped up and down with glee. I had hoped that with this one Simone might try for something a little different, and it certainly seemed that way. But what I got was more of the same tried and true Simone Elkeles, but not in the best way.

Step 1 of the Simone Elkeles formula is a “bad boy” who’s really a sweetie underneath. That’s Derek. In the beginning, he’s a hot and annoying guy with a sense of entitlement getting kicked out of his fancy prep school. But, of course, there’s more to him than that: his mom is dead, his dad is in the Navy and his dad’s new wife is closer to Derek’s age with a kid of her own. Step 2 is the driven, tougher than she seems female. That’s Ashtyn. Her family life is crap, but she is dating the star quarterback while being the team’s star kicker. She’s even voted captain of the team.

But then, of course, things go south. Derek is forced to move in with his step-mom’s family, including his “step-aunt” Ashtyn. Ashtyn’s boyfriend leaves the team for the rival high school, leaving her team hopeless and her heartbroken. What are two depressed teens to do?

Honestly, I’m fully aware when I start out in a Simone Elkeles book that a realistic love story isn’t always going to be the case. That’s not why I’m here. It has more to do with the fact that even Simone is tired of the same story that she keeps writing over and over again.

For example, there is no preamble when the two meet each other. They start right into the “I act annoyed but I’m so into you” dialogue while admitting to the reader that they are both totally into the other person. Then there is the obligatory “saving the girl from her terrible, awful boyfriend” that gets the two of them to go on a “non-date” with each other. They end up making out, but then totally pulling back because “they aren’t right for each other.” Then there’s the obligatory “road trip that pulls them together.” (No, this isn’t spoilery. There is a bunch of other stuff that happens that I’m not mentioning because it would be.)

It all happens so ridiculously fast. I mean, this is really a norm now–love stories that go too fast to be real–but this is the first time in a long time it’s actually made me upset. I know that Simone can make one book love stories feel acceptable, but this one just stopped trying. I really, really wish that this had been at least two books, because I really enjoyed the characters. They might have been her stereotypical cast, but I still enjoy them very much. it’s just like the book was zooming right along to the reader, just trying to make the journey to the inevitable end as swoon worthy and steamy as possible.

Don’t get me wrong, this is NOT a bad book. If you are a fan of Simone’s other work, you’ll probably love this one just as much. I just wanted to see her do something a little bit different after the Perfect Chemistry trilogy, which was basically three books with the same story line. Simone does swoon worthy, steamy and adorable fantastically well. Again, this one is no different. But that was just my problem. It’s no different.

*This book has a PG-13 rating. I assume you know this because Simone Elkeles, but just in case.